Size750mL Proof122 (61% ABV)
The 8th in the line of GlenDronach's Cask Strength expressions owes its full body and richness to PX and Oloroso sherry casks. It's been aged for 9 years and is bottled at 122 proof, showcasing the distillery's style perfectly.
Notify me when this product is back in stock. 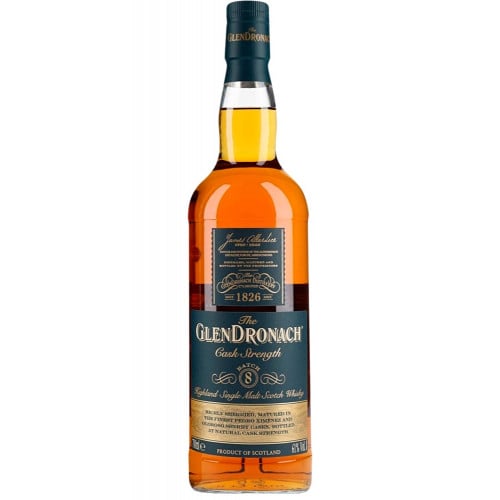 About The GlenDronach Cask Strength Batch 8

The year is 1826, the Temperance Society had just been formed in Boston, Beethoven’s Quartet No. 13 is premiered in Vienna, the combustible engine is being patented, and deep within the Scottish Highlands, in the land of peat and bagpipes, the GlenDronach distillery is being born. GlenDronach got its start shortly after the Excise Act of 1823 when James Allardice became the second person to apply for a license to distill Whisky in Scotland. Ever since, the iconic Scottish distillery has been under the ownership of several well-known names in Scotch, namely; Walter Scott, Captain Charles Grant, and William Teacher and Sons.

2008 was another period of revamping for the distillery, as they were again sold, in its most recent exchange, to BenRiach. GlenDronach is known for their classic "sherried" Whiskies, meaning the spirit is aged in Oloroso casks. Each single malt is produced using old fashioned handcrafted techniques created through nearly 200 years of tradition. The production process is meticulously monitored from germination to bottling. The distillery has a copper mash tun, 4 stills, two of which are traditional wash backs, and 2 copper pot stills.

The GlenDronach Cask Strength Batch 8 is the 8th revision of the expression that showcases the distillery's heart and soul. Matured for 10 years in Pedro Ximenez and Oloroso sherry casks, it's bottled without chill filtration at an undiluted 122 proof under the watchful eye of Master Blender Rachel Barrie. It's an incredibly full-bodied single malt that owes its richness to the sherry casks.