This product is available in: NH, NJ, WA Unfortunately, we can't ship to PO Boxes and APO addresses.

Size750mL Proof82 (41% ABV)
Crafted with 14 different Highland and Islay whiskies, this blended Scotch features a higher percentage of Islay whisky, making for a smokier and spicier expression than The Gladstone Axe American Oak.

This product is available in: NH, NJ, WA Unfortunately, we can't ship to PO Boxes and APO addresses. 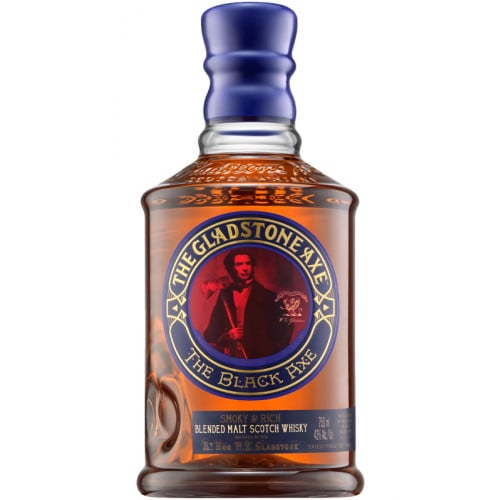 William Ewart Gladstone was a prominent British politician, known for serving 12 years as Prime Minister of the UK. He is also famous for signing the Spirits Act of 1860 that allowed for single grain and single malt whiskies to be blended, paving the way for the modern Scotch whisky industry. Gladstone was an axe collector and enthusiast who enjoyed felling trees. "The Grand Old Man," as he was known, served as the inspiration for The Gladstone Axe ― a brand that was launched by Biggar and Leith. Coincidentally, the founder and CEO of Biggar and Leith is the great-great-grandson of William Gladstone.

Gladstone Axe whisky is crafted with 100% malted barley. It's a blend of whisky from 14 different Highland and Islay distilleries that is aged in Scotland in American oak ex-bourbon casks that impart the spirit with a gentle sweetness. Crafted to be a versatile spirit, Gladstone Axe American Oak is sweet, oaky, and smooth with hints of smoke. It's equally delicious as a sipper, on the rocks, or in various cocktails. The Black Axe is the second expression in their lineup. It features a higher percentage of Islay whisky, making it smokier and spicier.

The nose opens with sweet and fruity notes with toffee, malt, vanilla, and hints of brine. It's smoky on the palate with honey, green apple, and a pleasant vanilla sweetness. The finish is spicy and oaky with lingering earthy smoke notes.