Size150mL ProofVarious ABV
The Malt Whisky Collection contains 3 Compass Box expressions: The Peat Monster, The Spice Tree, and The Story of the Spaniard. These are a wonderful introduction into the world of Compass Box and a delightful gift for any whisky lover.

*Compass Box has recently changed its designs, and as the original labels are being phased out, there is still a chance that you might receive a gift set different than what is in the picture. Rest assured, the liquid remains the same, regardless of the design.
Notify me when this product is back in stock. 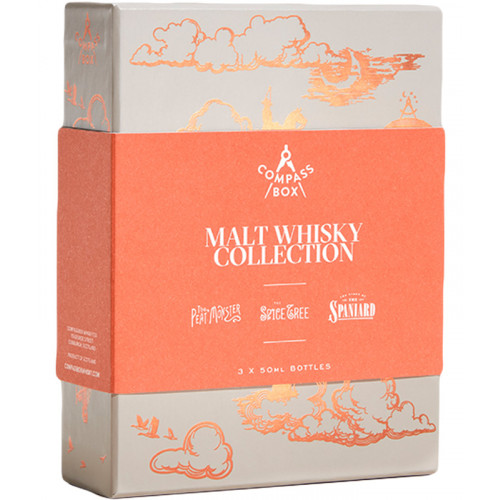 The Malt Whisky Collection Gift Box Set comprises 3 whiskies from their core collection of malts. The Peat Monster (92 proof) is made from a blend, or vatting, of single malt whiskies from Islay (50%), Speyside (30%) and the Islands (20%) that are each between 10 and 16 years old and come from Caol Ila, Laphroaig, Ardmore, and an Island single malt. Spice Tree Blended Malt Scotch Whisky (92 proof) is a blend of 10 to 12-year-old single malt Scotch whiskies sourced from distilleries situated in the northern Highlands region of Scotland (primarily Clynelish, Dailuaine, Longmorn, and Teaninich). The Story of the Spaniard (86 proof) is a nod to Glaser’s chance encounter with a man in the South of Spain, where he was introduced to Sherry for the first time. For this expression, 48% of the whiskies have been aged in ex-Sherry casks and 25% in ex-Spanish red wine casks. The threesome makes for a wonderful introduction into the world of Compass Box.

Gift it to a loved one or yourself today!

The Peat Monster: Intensely peaty nose, reminiscent of beach bonfires. Notes of smoke are balanced by a hint of fruitiness and lead to a subtle yet lingering finish.

The Spice Tree: Aromas of ginger, cinnamon, and clove give way to bold notes of vanilla, malt, and brown sugar, along with a hint of dried fruits. The satisfying finish is long and well-balances the sweet notes of vanilla with the spicy notes of cinnamon and allspice.

The Story of the Spaniard: Full, soft, and sumptuous on the palate with notes of citrus peel, red wine, and spices. The finish is long, with hints of rich vanilla panna cotta, ripe berries, and cherries.