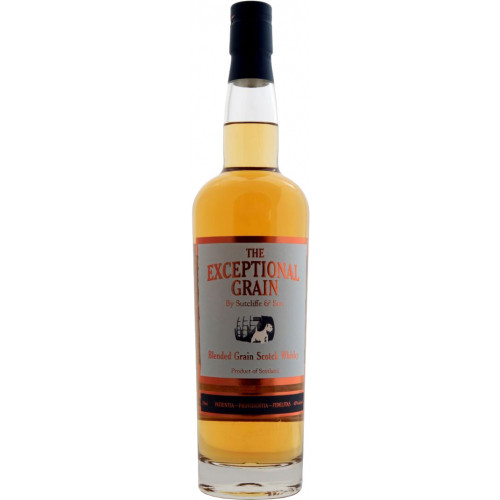 About The Exceptional Grain

The Exceptional Grain Scotch Whisky is the product of a collaboration between Don Sutcliffe, the Managing Director of Craft Distillers, and Willie Phillips, the Managing Director of the Macallan Distillery in Scotland. "Since the autumn of 1987, Phillips and I have envisioned working together to craft a qualitatively and stylistically distinctive whisky," says Sutcliffe, who has over 35 years of experience in the whisky industry. "In the spring of 2010, Willie and I set about creating the platform to craft small batch whiskies. We have sourced and selected barrels with unique and distinctive characteristics, which we blend to our sensibilities, thus crafting what we intend and believe to be authentically wonderful whisky."

The Exceptional Grain Scotch Whisky is a blend of three different barrels sourced by Sutcliffe and Phillips: a barrel distilled in 2000 at the North British Distillery, which is the backbone of The Exceptional Blend and provides distinctive notes of vanilla and caramel; a barrel sourced from the Loch Lomond Distillery, which imparts hints of blackberries and lemon; and a 30 year-old whisky sourced from the Carsebridge Distillery that adds the depth of maturity, with touches of toffee and cream. "This final barrel, which is exceptionally rare, comes from a distillery that was founded in 1799 and closed its doors in 1983," says Sutcliffe. "It's exceptional — it really harmonizes the whisky and provides a depth and elegance that nothing else could."

Once each of the barrels was sourced, the whiskies were married together in first-fill sherry casks, imparting a touch of berries and red fruits to the dry finish.

The Exceptional Grain Scotch Whisky has a soft and gentle aroma, with touches of toasted bread, maize and sweet fruit. The aroma gives way to hints of blackberries, lemon and vanilla that are complemented by overtones of oak, dark toffee and rich espresso beans. The finish is warming and slightly dry, with a hint of red plums and berries.

Only 1,500 bottles of the whisky have ever been made.

Soft and gentle aroma, with touches of toasted bread, maize and sweet fruit. Hints of blackberries, lemon and vanilla that are complemented by overtones of oak, dark toffee and rich espresso beans. Finish is warming and slightly dry, with a hint of red plums and berries.