This product is available in: CA, DC, KY, NH, ND Unfortunately, we can't ship to PO Boxes and APO addresses.

Size750mL Proof92 (46% ABV)
Released in 2015 as a part of AnCnoc Peaty Collection, this expression clocks in at 11.1 ppm. It's a lightly-peated single malt whisky that has spent nearly a decade in ex-bourbon barrels before being bottled at 92 proof.

This product is available in: CA, DC, KY, NH, ND Unfortunately, we can't ship to PO Boxes and APO addresses. 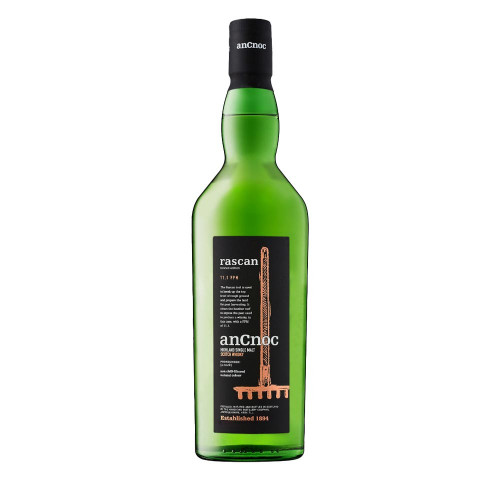 Over a century after its original founding, little has changed at the distillery. AnCnoc Single Malt Scotch Whisky (anCnoc is one of the few whiskies not named after the distillery that produces it) is made from fresh, plump barley, much of it still harvested from the fields that surround the distillery. Once the grains have been harvested, they are malted and mashed before being fermented in one of the distillery's six original wooden washbacks.

Following fermentation, the wash is distilled twice through Knockdhu's century-old, copper-pot stills. The stills have unusually flat bases as compared to stills at other Scottish distilleries, which forces the alcohol vapors to travel up the long, narrow neck of the still and results in a lighter and more fruity whisky. In addition, the stills are equipped with worm tubs — large tanks of cold water that are used to condense the alcohol vapor back into a liquid spirit. These worm tubs — most distilleries abandoned worm tubs for condensing units long ago — are a testament to Knockdhu's commitment to producing a traditional style of malt whisky.

AnCnoc Rascan is named after a tool used for harvesting peat. Aged nearly a decade in ex-bourbon barrels, the expression is on the lighter side of their Peaty Collection, clocking in at 11.1 ppm (phenol parts per million). The classic fruity Knockdhu profile is there with the gentle peat making for a well-rounded and complex expression. At 92 proof, it's going to please anyone delving into the smokier side of Scotch as well as the experienced peat-head craving a more lightly-peated dram.

Get your bottle of this lightly-peated whisky today!

The earthy nose has honey sweetness, green apples, and citrus zest, along with a gentle touch of peat. It's sweet and spicy with vanilla and honey on the palate followed by a touch of toffee, subtle spice, and a hint of leather. Finishes floral with a touch of smoke.