Learn more
Size750mL Proof86 (43% ABV) *Please note that the ABV of this bottle may vary
Aged for over 40 years, this whisky earned the Double Gold Medal at the San Francisco World Spirits Competition in 2014, where it was named "Best Blended Scotch Whisky."
Notify me when this product is back in stock. 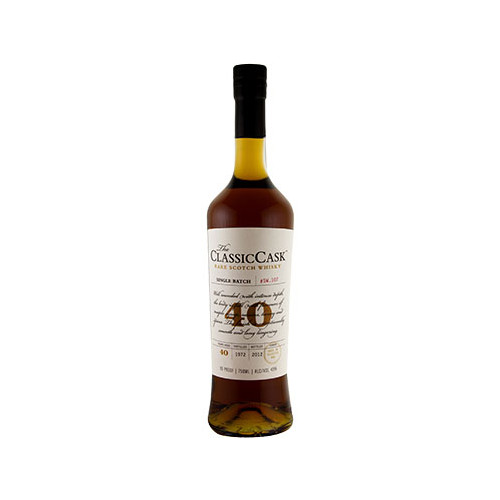 The Classic Cask 40 Year Old Rare Scotch Whisky is a 40 year-old whisky that was blended together under the supervision of renowned Master Blenders David Hallgarten and Robert Mendelshon. Together, the pair sourced some of the finest whiskies in Scotland that had already aged for 15 years in a combination of ex-bourbon and ex-sherry casks. Once the whiskies were identified, they were blended together and put back in their original casks for an additional 25 years. After this quarter-century beautyrest, the whiskies were finished for six more months in casks that were previously used to mature Oloroso sherry.

The Classic Cask 40 Year Old Rare Scotch Whisky has an incredible aroma of raisins, maple syrup, dates and warm spices. Notes of marzipan, figs, honeyed oak, red fruits and chili dominate the palate, and lead to a finish accented by hints of mint, oak and cherries.

Only 1,980 bottles of this whisky have ever been produced. Pick up a bottle of the best today!