Learn more
Size750mL Proof86 (43% ABV) *Please note that the ABV of this bottle may vary
Matured exclusively in Oloroso sherry casks from Jerez, Spain, this 18-year-old single malt is rich, fruity, and full-bodied, once again showcasing the skill of The Macallan's Master of Wood.
Notify me when this product is back in stock. 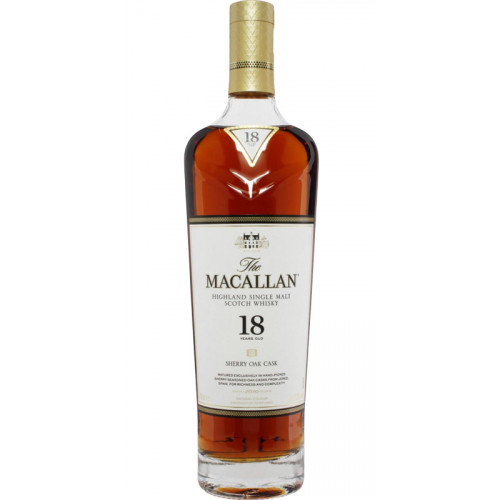 The Sherry Oak range features rich & intense single malts matured in hand-picked Oloroso sherry casks. This expression spent 18 years in such casks that come from Jerez, Spain. Bottled at 86 proof, the 2021 release is robust, full-bodied, and rich with notes of oak, ginger, and raisin.

Get your bottle of this exquisite single malt today!

The whisky is a beautiful light mahogany with dried fruit, ginger, vanilla, and cinnamon aromas on the nose. The palate is soft and rich with spice, clove, orange, and toasted oak, finishing long with dried fruit, orange zest, and ginger notes.