Size750mL Proof92.4 (46.2% ABV)
This stunning new Ardbeg is inspired by Islay’s Traigh Bhan beach, known by locals as the Singing Sands.
Notify me when this product is back in stock. 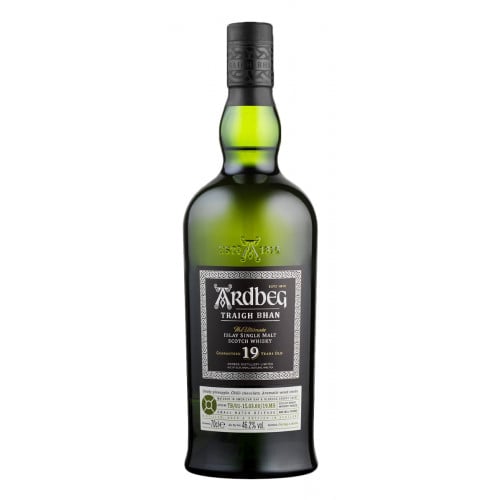 Ardbeg Uigeadail (pronounced ""Oog-a-dal"" ) Single Malt Scotch Whisky takes its name from Loch Uigeadail, which is situated 800 feet above sea level and remains the only source of pure water for the distillery. "It's one of the raw materials we must have," says Michael Heads, Ardbeg's Distillery Manager, of the water sourced from the loch. "Loch Uigeadail" translates as the dark place — "it's got very deep, peaty water in it and it's what we require for making our bold whisky. So it's vitally important."

This incredible 19-year-old whisky is matured in American oak and Oloroso sherry casks – Ardbeg Traigh Bhan effortlessly accomplishes the impossible balance. Ardbeg Traigh Bhan is inspired by Islay’s Traigh Bhan beach (known locally as the Singing Sands), this rare aged spirit is an enchanting reflection of the place to which it owes its name. The palate delivers a strong peaty experience followed by waves of toasted oak and paprika which glide towards a gentle finish that resonates long beyond the glass.