Learn more
Size750mL Proof103.4 (51.7% ABV) *Please note that the ABV of this bottle may vary
To celebrate Ardbeg Day 2021, Ardbeg released a highly limited-edition Committee Release. Aged in ex-bourbon American oak casks and bottled at 103.4 proof, this is beautiful tribute to Ardbeg's mastery.
Notify me when this product is back in stock. 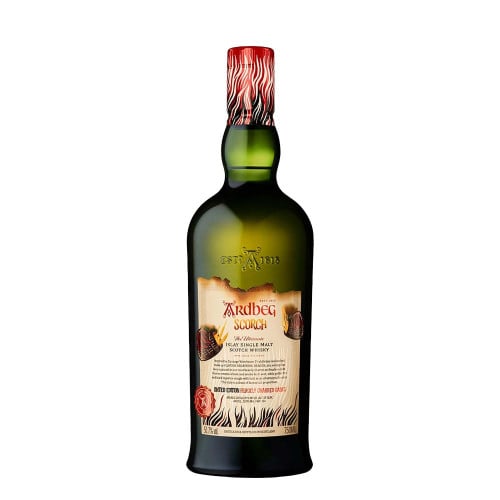 The southern most of the Inner Hebridean Scottish Isles, the island of Islay (pronounced EYE-lah) is only 240 square miles and home to just over 3,000 inhabitants. Still, the island is one of just five distilling regions in Scotland whose identity is protected by law.

Ardbeg Distillery, which is situated on the southern coast of Islay, was founded in 1815 by the MacDougall family. By 1886, nearly one-third of the population of Islay worked at the distillery and today, it stands as a testament to Scottish heritage and tradition. Famous for producing some of the boldest and most robust Scorch whisky in the industry, today, the distillery remains a testament to Scottish innovation and heritage.

To celebrate Ardbeg Day – an annual celebration of all things Ardbeg on the island of Islay – the limited-edition Committee Release of Ardbeg Scorch was launched. Aged in ex-bourbon American oak casks and bottled at 103.4 proof, expect aromas of soot and smoke on the nose and an oily mouthfeel with sweet smoke and charred oak. “Ardbeg Scorch is our tribute to the legendary dragon of Islay,” Ardbeg’s Director of Distilling and Whisky Creation Dr. Bill Lumsden said in a prepared statement. “By using our most heavily-charred casks, we’ve created a fire-breathing beast of a dram!”

Get your limited-edition Ardbeg today!

Bright gold color. The nose is intense with aroma of soot and smoke. The palate is multi-layered with an oily mouthfeel and clouds of sweet smoke and charred oak. The finish is insanely long and smooth.