$176.99
Caskers Rewards members earn up to 8 store points back when buying this bottle.

Size750mL Proof96.6 (48.3% ABV)
Balvenie Peat Week is a rare wonder. It has all the classically delicate and complex Speyside flavors you expect plus something you’ve never had in a Balvenie before — peat smoke.
Notify me when this product is back in stock.

Caskers Rewards Caskers Rewards members earn up to 8 store points back when buying this bottle. Learn more
Out of stock
Skip to the end of the images gallery 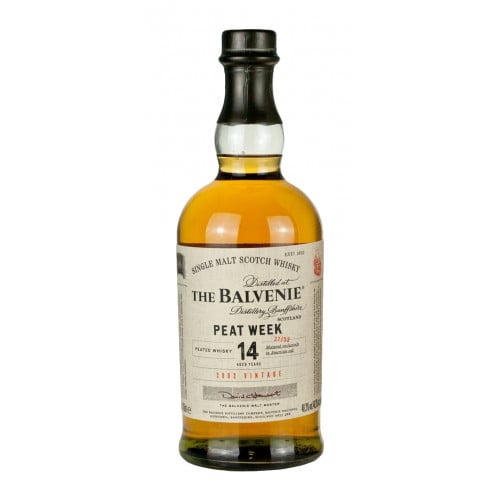 Still owned by William Grand & Sons, The Balvenie has long been a favorite of Speyside Whisky lovers. It’s famous for producing Single Malts in the classic styles of the region — light, fruit-forward, sweet, and clean without a trace of peat smoke. Balvenie took it a bit further, being one of the first to innovate with various double and triple-wood combinations to add complexity. All that adds to a large range of Single Malt agings and wood combinations to entertain the taste buds of fans all over the world.

You can still taste the signature Balvenie Single Malt style — notes of tropical fruits, honey, peaches, and vanilla. But now it also has a warm, earthy smoke flavor and aroma. It’s Balvenie as you’ve never had it before, and still very different from the famous Islay peated spirits on the other side of Scotland. It’s should be on the "must have" list of every Speyside and Balvenie fan.

The most delightfully complex Single Malts this year. The nose is full of tropical fruits and almonds with a dash of smoke. The palate is creamy with vanilla, peaches, graham crackers, a "floral smokiness," and a long honeyed finish.