This product is available in: MI, TX Unfortunately, we can't ship to PO Boxes and APO addresses.

This product is available in: MI, TX Unfortunately, we can't ship to PO Boxes and APO addresses. 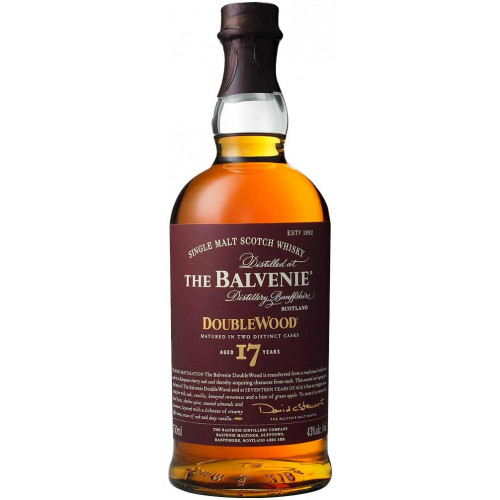 Once the barley has been malted, it is milled and mashed at the distillery before being fermented using a proprietary strain of yeast. Following fermentation, the wash is distilled twice, first through Balvenie's copper-pot wash still and then again through its copper-pot spirit still. "The most important reason for using a copper still,"explains Dennis McBain, Balvenie's coppersmith, "is that it acts as a catalyst. It removes any Sulphur which may be carried over from the fermentation process prior to distillation." McBain, who joined Balvenie Distillery in 1959, is one of the oldest coppersmiths remaining in the industry.

In addition, the size and shape of Balvenie's stills — the stills' necks have unique boil balls that are nicknamed "Balvenie Bowls" — results in Balvenie's signature bold and malty flavor profile. "The size and shape of the boil ball allow for the vapors to mix before continuing up the head, "explains McBain. "That helps make The Balvenie special."

The Balvenie 17 Year Old Doublewood Single Malt Scotch Whisky was originally made in homage to David Stewart (Balvenie's Master Blender), who celebrated five decades of working at the distillery in 2012. Following distillation, The Balvenie 17 Year Old Doublewood matured in traditional, American oak casks before being double-barreled, or finished, in European oak casks that were previously used to mature sherry. As a result of spending seventeen years in oak casks, the whisky has deep notes of vanilla, green apple, and toffee. Aroma of oak, vanilla and green apple. Notes of dark fruits, raspberries, toasted almonds, coffee and butterscotch lead to a finish that is deep and lush, with notes of fruits mingled with spices.

Balvenie 17 Year Old Doublewood earned a score of 95 points from The Tasting Panel Magazine, which said that the whisky had a "long, smooth toasty finish" that was "elegant."

Pick it up today!

Aroma of oak, vanilla and green apple. Notes of dark fruits, raspberries, toasted almonds, coffee and butterscotch. Finish is deep and lush, with notes of fruits mingled with spices.