Size750mL Proof96 (48% ABV)
This exceptional experimental single malt, is the brainchild of Balvenie’s Malt Master David C. Stewart MBE and Ian Millar, former distillery manager and current Prestige Whiskies Specialist at William Grant & Sons.
Notify me when this product is back in stock. 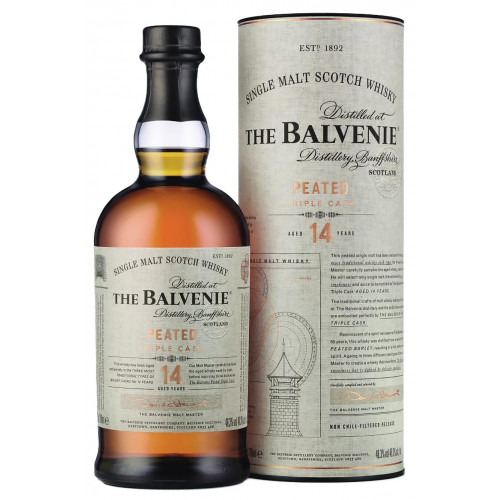 Balvenie Single Malt Whisky is made from fresh, plump barley grown on Balvenie Mains, a 1,000-acre farm situated adjacent to the distillery (the farm has been the distillery's source for barley for over a century). After the barley is harvested, it is malted at the distillery with spring water sourced from the rolling Speyside hills that overlook the distillery. During the malting process, the barley is turned up to four times a day in order to ensure that it germinates evenly (Balvenie is the only single malt Scotch whisky distillery that continues to grow and malt its own barley).

In addition, the size and shape of Balvenie's stills — the stills' necks have unique boil balls that are nicknamed "Balvenie Bowls" — results in Balvenie's signature bold and malty flavor profile. "The size and shape of the boil ball allow for the vapors to mix before continuing up the head," explains McBain. "That helps make The Balvenie special.”

After distillation, this special Balvenie expression is aged for 14 years in an assortment of bourbon and sherry casks. Released in June 2017, this peated single malt expression is a travel retail exclusive. This special whisky is non-chill filtered and aged in three varieties of casks; first-fill bourbon, refill bourbon and sherry. “A whisky with exceptional smoky sweet notes with cinnamon and ginger spiciness” (producer). Bottled at 48% ABV, “This bottling, and The Balvenie Peat Week (2002 Vintage), is the result of trials undertaken by The Balvenie’s Malt Master David C. Stewart MBE and Ian Millar, former distillery manager and current Prestige Whiskies Specialist at William Grant & Sons” (producer).

Pick it up the Balvenie today!

A malty sweetness on the nose complemented by gentle smoke in the background. Vanilla toffee gives way to a cinnamon spiciness. Smoke comes to the fore followed up by syrupy sweetness on the palate, fresh citrus, creamy vanilla and honey, ending with a cinnamon and ginger spice. The finish has a delicate smoke with a lingering and spicy sweetness.