Learn more
Size750mL Proof92 (46% ABV) *Please note that the ABV of this bottle may vary
Only 9,000 bottles of this whisky, which is the oldest ever released by Arran Distillery, were produced.
Notify me when this product is back in stock. 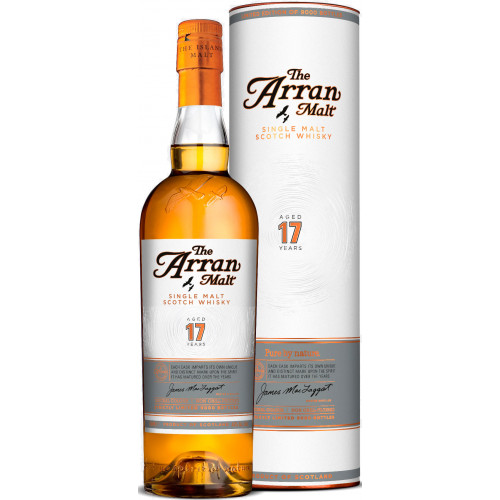 Arran 17 Year Old Single Malt Scotch Whisky is the second limited edition release in a trilogy series leading up to Arran’s permanent 18 year old expression; to date Arran 17 Year Old Single Malt Scotch Whisky is the oldest whisky released by the Arran Distillery. The whisky is made from unpeated Scottish barley, which is malted and then fermented using a proprietary strain of yeast. Once the barley has been fermented, the wash is distilled twice — first through Arran’s copper-pot wash still and then again through Arran’s copper-pot spirit still. The stills were custom designed, says MacTaggart, and “shaped to allow the lighter vapors to come up through the stills.” As a result, Arran Single Malt Scotch Whisky has an appreciably softer and more delicate flavor profile.

Arran 17 Year Old Single Malt Scotch Whisky is matured exclusively in ex-sherry butts for a minimum of 17 years before being bottled at the distillery at 92 proof. “Selecting the right cask, knowing when that cask should be opened or left to mature for a little longer or adding a specific cask finish to enhance the flavor are gifts it takes generations to perfect,” says MacTaggart.

The whisky has a mesmerizing aroma of burnt orange, rich milk chocolate and clove honey. The palate is zesty with notes of caramelized sugar and pecans, and leads to a full-bodied and lasting finish accented by licorice, marshmallow and cola.

Only 9,000 bottles of Arran 17 Year Old Single Malt Scotch Whisky will ever be available worldwide — make sure to pick yours up today!

Mesmerizing aroma of burnt orange, rich milk chocolate and clove honey. The palate is zesty with notes of caramelized sugar and pecans, and leads to a full-bodied and lasting finish accented by licorice, marshmallow and cola.