Size750mL Proof86 (43% ABV)
Aged for up to 15 years, this whisky was named the World's Best Grain Whisky twice by Whisky Magazine. 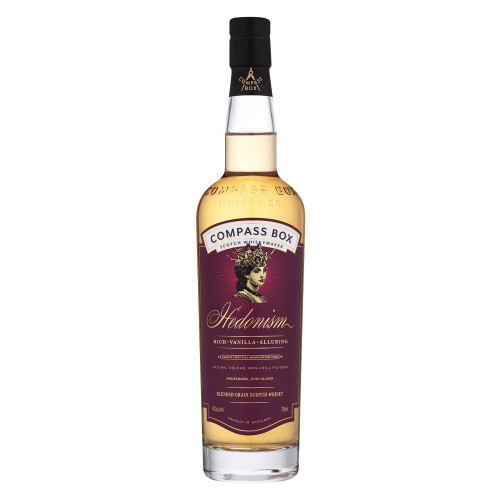 Compass Box Hedonism is a unique blend of grain Scotch whisky. Nearly a century ago, grain whiskies were common across Europe, but were overtaken in terms of popularity when the larger distilleries in Scotland began focusing on single malt whisky. "When good Scotch grain whisky is aged in good quality American oak casks, the results can be stunning," says Glaser.

Hedonism is a blend of grain whiskies, each of which has matured for a minimum of eight years and a maximum of fifteen years. "We only produce Hedonism once or twice per year, depending on our ability to source the quality casks we require," says Glaser. Generally, the whisky is sourced from five different distilleries, including Cameron Bridge, Carsebridge, Cambus, Port Dundas and Dumbarton. Once the whiskies are married together, they are aged for an additional two years in first-fill American oak casks or rejuvenated American oak hogshead casks. "Steps like these enhance complexity, flavor integration and soft mouthfeel," says Glaser. "Extra steps, but we think they're worth it."

Compass Box Hedonism has an aroma of ripe fruits (particularly apricots and peaches), along with touches of sponge cake and caramel. The palate is full-bodied and robust, with notes of red pepper mingled together with notes of toffee, coconuts and vanilla cream. The finish is smooth and warming, with a touch of cloves and spices that linger. The whisky was named the "World's Best Grain Whisky" twice by Whisky Magazine.

"We believe that great Scotch grain whisky is the little-known treasure of the Scotch whisky industry," says Glaser.

Aroma of ripe fruits (particularly apricots and peaches), along with touches of sponge cake and caramel. Palate is full-bodied and robust, with notes of red pepper mingled together with notes of toffee, coconuts and vanilla cream. Finish is smooth and warming, with a touch of cloves and spices that linger.