Learn more
Size750mL Proof92 (46% ABV) *Please note that the ABV of this bottle may vary
This special whiskey was awarded World’s Best Irish Single Malt in 2016 at the World Whiskies Awards.
Notify me when this product is back in stock. 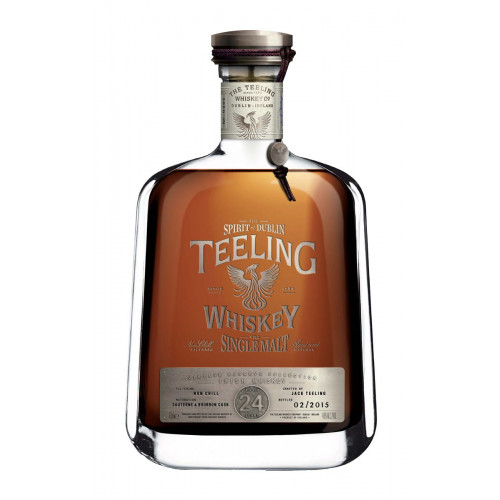 Teeling’s Vintage Reserve Collection has some of the oldest bottles of Irish single malt. This 24 Year Old vintage was distilled in 1991, and underwent dual maturation, being filled firstly in ex-Bourbon barrels, then Sauterne wine casks – yielding an “extra depth” of fruit flavors. This flavor is offset by “a hint of smoke” which comes from the small portion of peated malt.

"Limited to just 5,000 bottles, the Teeling Whiskey Company is proud to introduce this special release of some of the oldest Irish Single Malt in the world. Matured initially in Bourbon casks before being given an additional maturation in ex-Sauternes wine barrels, imparting a distinctly unique flavour. Bottled at 46% with no chill filtration completing a whiskey of true character. Awarded World’s Best Irish Single Malt, 2016 at the World Whiskies Awards, this is a whiskey to savour” (producer).

Aromas of white grapes, cut grass, apricots and white chocolate on the nose. The palate is silky smooth, with flavors of fig jam, honey, apricots, white chocolate and crisp saltiness at the end to balance the sweetness off. The finish is long and mellow.