Learn more
Size750mL Proof106 (53% ABV) *Please note that the ABV of this bottle may vary
Distilled in 1992, this Irish single malt was initially matured in hand-selected bourbon barrels for more than 10 years before being re-casked in 2004 to be finished in PX sherry casks. Bottled without chill filtration at 106 proof, it's a wonderfully mature 29-year-old whiskey.
Notify me when this product is back in stock. 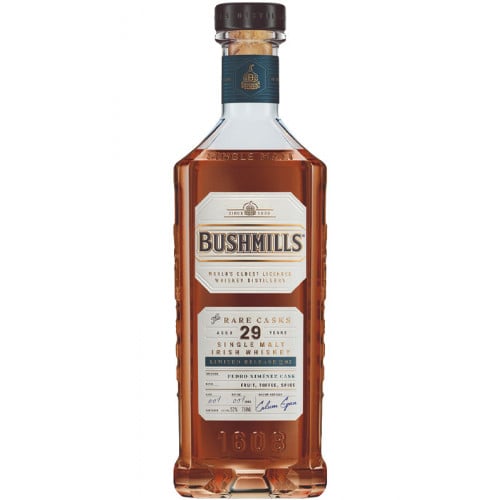 The history of Bushmills is a storied one, steeped in history. In 1608, King James I of England granted Sir Thomas Phillips — the governor of Bushmills, County Antrim in Northern Ireland — a license to distill on his territory. Even in those early years, before the Old Bushmills Distillery Company was officially established (Hugh Anderson did so in 1784, and registered the first-ever trademark for the pot still), historical accounts show that a great quantity of whiskey was produced there. And though several events — including a disastrous fire in 1885, as well as World War II — halted production at the Old Bushmills Distillery, the distillery determinedly fought on. Bushmills remains an icon in Irish Whiskey, its picturesque facilities a popular tourist destination.

The distillery was purchased by Isaac Wolfson at the end of World War II. Then the Irish Whiskey industry dried to a trickle. Bushmills was one of only two distilleries in Ireland in 1972, until it was taken over by Irish Distillers. This gave Irish Distillers complete control of whiskey production in Ireland. In June 1988, Irish Distillers was bought by French liquor group Pernod Ricard, and then in June 2005, the distillery was bought by Diageo. Bushmills is now in the hands of Jose Cuervo and celebrated its 400th anniversary in 2008.

This expression is a wonderfully mature 29-year-old Irish single malt. The whiskey was triple distilled in 1992. It was then left to mature for more than a decade in hand-picked bourbon casks. It was re-casked in 2004 and finished in Pedro Ximenez sherry casks, before being bottled at a cask strength of 106 proof, without chill filtration. Seeing how the spirit spent more than half of its life in sherry casks, it's a rich, sweet, and fruity whiskey with notes of dried fruit, praline, orange zest, vanilla, toffee, and clove.

Get your bottle of this Irish single malt today!

The nose opens with rich aromas of toffee and clove. The palate is layered with plenty of dried fruit, orange zest, praline, and signature vanilla notes. Pastry notes linger through the long finish with more dried fruit and a creamy sweetness.