Caskers Rewards members earn up to 2 store points back when buying this bottle.
Size750mL Proof80 (40% ABV) each
Aged for a minimum of three years, Tatoosh Bourbon earned the Platinum Medal at the SIP Awards in 2013 and 2014.
Notify me when this product is back in stock. 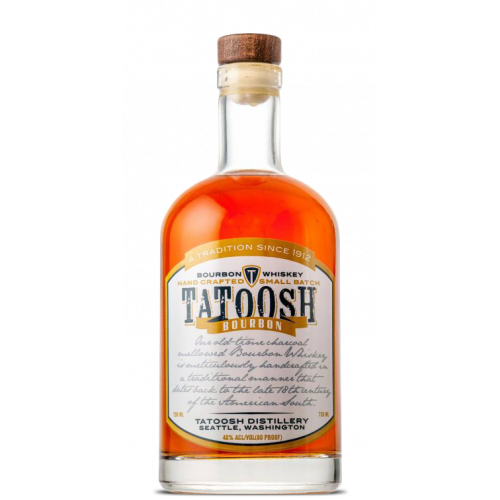 Nearly a century ago, Troy Turner's ancestors were bootlegging spirits during Prohibition — his maternal grandparents distilled whiskey in the Deep South while his paternal grandparents transported and sold it. "Hiding a still in the woods was simple compared the challenges of transporting your wares to town," says Turner. "Federal agents would hide out along backcountry roads and wait for the chance to arrest a moonshine runner. The mountains are full of stories of men like my grandfather, who ran liquor to the rest of the country."In 2009, Turner decided to continue his family tradition and opened the doors to Tatoosh Distillery & Spirits, situated in Seattle, Washington.

Tatoosh Bourbon Whiskey is made using a century-old recipe that has been passed down in the Turner family for generations. The recipe calls for a mash of 70% corn, 15% rye and 15% malted barley, all of which are sourced from local farms. "When we say local,"Turner adds, "we mean it. The barley we use to create Tatoosh Bourbon can be seen in the field right across from the distillery."Once the grains are harvested, they are milled and mashed before being fermented using the traditional sour mash method (sour mash refers to the traditional art of using a small amount of spent mash from an older batch of whiskey in order to catalyze fermentation in a new batch of whiskey).

Following fermentation, the wash is distilled through a 500-gallon, hybrid copper-pot and column still. The still is equipped with an unusually tall neck that allows only the lighter vapors to pass through the still, ultimately resulting in a more refined bourbon. Once the bourbon has been distilled, it is aged in new, 53-gallon American oak casks with a #3 char for a minimum of three years. During this maturation process, the barrels are rotated every three or four weeks in order to expose as much of the bourbon as possible to the oak.

Following maturation, the bourbon is bottled by hand. Tatoosh Bourbon Whiskey has an aroma of dark fruits, vanilla, apricots and barley. The aroma gives way to notes of woody spices, papaya, mangos, tropical fruits and citrus that are well-balanced by a subtle vanilla undertone. The finish, which is long and slightly drying, lingers just enough.

Tatoosh Bourbon earned the Gold Medal at the Beverly Hills Spirits Competition, and the Platinum Medal at the SIP Awards in 2013 and 2014.

Aroma of dark fruits, vanilla, apricots and barley. Notes of woody spices, papaya, mangoes, tropical fruits and citrus that are well-balanced by a subtle vanilla undertone. Finish, which is long and slightly drying, lingers just enough.