Learn more
Size750mL Proof119.4 (59.7% ABV) *Please note that the ABV of this bottle may vary
This 8-year-old single malt Scotch whisky comes from Talisker's most heavily peated reserves. The spirit from the Isle of Skye is bottled at 119.4 proof, making it a powerful seaside expression with prominent smoke notes.
Notify me when this product is back in stock. 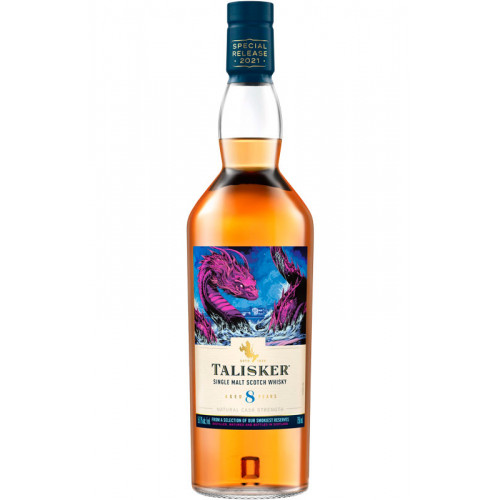 Diageo's 2021 Special Releases Collection showcases the iconic distilleries with expressions such as this Talisker 8 Year Old. The single malt Scotch comes from the distillery's most heavily peated reserves, meaning that you can expect plenty of smoke notes, along with brine, cereal, and a gentle sweetness. Aged in refill casks, the whisky is bottled at 119.4 proof making it a powerful seaside expression.

Grab a bottle of this heavily peated single malt today!

The nose opens with an abundance of cereal aromas, followed by brine, seaweed, and smoke. The palate is savory with a gentle sweetness and prominent smoke notes that linger through the long finish.