Size1125mL Proof90 (45% ABV)
This gift pack contains 3 of Taconic's best-selling whiskeys: the Dutchess Private Reserve Bourbon, the Double Barrel Maple Bourbon, and the Founder's Rye.
Notify me when this product is back in stock. 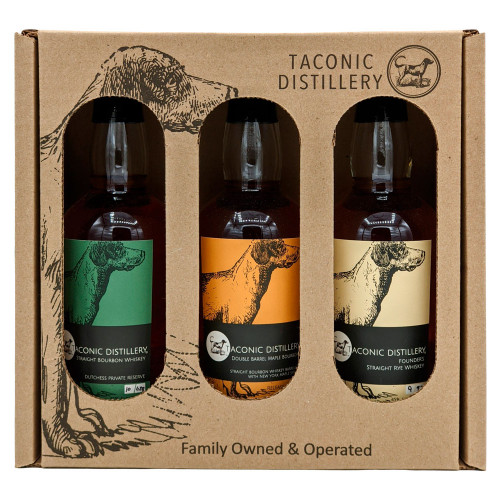 Taconic distillery’s home is the iconic Hudson Valley. Saturated with National Historic landmarks, the area boasts bountiful farms. With a fervor for the rustic outdoors and a strong desire to work the land, the Coughlin family purchased a portion Laured beef Farms, in Stanfordville, NY, in 2010, renaming it the Rolling Hills Farm. The former farm’s 113 acres of rolling hills became the inspiration for Taconic Distillery’s entrance to Dutchess County’s local agribusiness market. Inspired by a sporting lifestyle, Taconic’s team share a love of the outdoors. Together they embrace hunting, fishing, and a general passion for the outdoor life. This lifestyle is imprinted upon all their products.

Taconic prides itself on preserving bourbon whiskey tradition: “From George and Martha Washington’s home during the American Revolution, to the Great Estates of the Vanderbilt's, Roosevelt's and Rockefeller's, to the hunting preserves and horse farms of today, bourbon whiskey has been savored for generations.” To maintain an unadulterated flavor of the whiskey, Taconic never chill filter their whiskey and distill it below 160 proof to retain the flavors of the grains.

Taconic uses distinct Coopers Select, Char #3 new oak barrels made by the Independent Stave Company. Their barrels have a unique maturation process, being aged in shipping containers. Less is lost to the angel’s share, due to the saturation of the air inside the containers. Being exposed to great temperature fluctuations results in greater movement of spirit in and out of the barrel staves. Aging occurs in cycles, during times of increased temperature such as in the summer, the whiskey expands through the char, through to the untreated wood beneath. While in the wood, the whiskey dissolves various flavorful compounds. When temperatures drop, the liquid contracts and brings out all of the flavors of the wood, producing flavors that complement the body of the whiskey.

This gift pack contains three 375ml bottles of their biggest sellers: the Dutchess Private Reserve Bourbon, the Double Barrel Maple Bourbon, and the Founder's Rye. It's a great way to delve into Taconic's spirits, making for a delicious gift for any whiskey lover. The subtle and sophisticated Dutchess is an award-winning bourbon, the Double Barrel Maple Bourbon dials up the maple syrup sweetness, while the Founder's Rye is crafted to bring the best out of the local terroir. All 3 whiskeys are bottled at 90 proof.

Dutchess Private Reserve Bourbon: Sweet aromas on the nose, with notes of butterscotch and vanilla. On the palate are flavors of vanilla, caramel, honey, and malty sweetness. The finish is warm with spicy notes that linger.

Double Barrel Maple Bourbon: Hints of maple syrup sweetness greet the nose. There's a sweet buttery flavor on the palate with touches of maple syrup, corn, spices, and mint. The finish is rich and long.

Founder's Rye: Clean and crisp on the nose with notes of vanilla, butterscotch, and banana. On the palate are flavors of crisp vanilla, with notes of tall summer grass, caramel, honey, and delicate back palate sweetness. The finish is warm, with mildly sweet and spicy notes that linger.