Learn more
Size750mL Proof86 (43% ABV) *Please note that the ABV of this bottle may vary
This solera-aged blend of eighteen single malts and four single grain whiskies contains some of the original Syndicate 58/6 discovered in 1958.
Notify me when this product is back in stock. 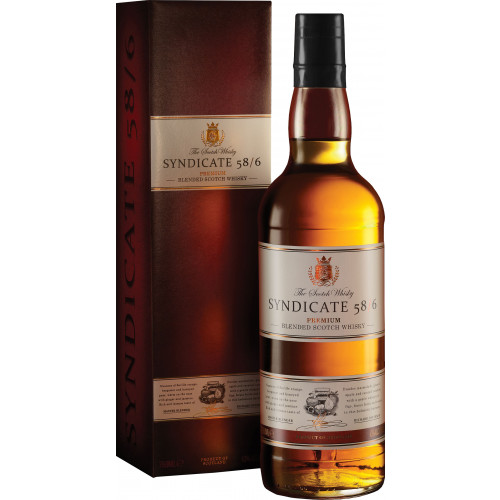 In 1958, a rare blend of Scotch malt and grain whiskies was found in 10 oak casks in the Port of Leith, Edinburgh in a warehouse owned by William Muir. It was soon discovered that the blend was originally distilled in 1954, and that the original recipe dated back to the 1800s. Several years later, in 1966, a small quality of the blend (which was now 12 years old) was bottled for the private use of the directors of William Muir. Six individuals were instrumental in this project, and therefore the whisky came to be known as “Syndicate 58/6”, named after both the year the Scotch was discovered and the number of people involved.

Syndicate 58/6 Premium Blended Scotch Whisky contains 18 single malt whiskies and 4 single grain whiskies, and is aged through a solera system. Solera aging involves filling a series of casks at different intervals over a long period of time. As whiskey from the oldest cask is emptied and bottled, the cask is re-filled with an equivalent amount of whiskey from the second-oldest cask in the solera. This cascading effect continues until the youngest cask in the solera is filled with new whiskey. As a result, no cask in the solera is ever fully emptied. In addition, as the younger whiskey ages and cascades through the solera, its average age and complexity gradually increases over time.

Because of the solera aging process, Syndicate 58/6 still contains a small amount of the original blend discovered in 19858. Finally, Syndicate 58/6 Premium Blended Scotch Whisky is “married” and additionally matured for up to two years in Oloroso Sherry casks imported from the Andalucia region of Spain.

As a result, Syndicate 58/6 Premium Blended Scotch Whisky has an burley aroma of roasted grains, cinnamon, oatmeal, orange peel and light smoke. The body is full of complexity, with notes of honey, apple pie, sherry and butterscotch, and leads to a hearty finish complete with smoked meats, pepper and tanned leather.

This limited edition was bottled exclusively for Mahesh Patel and Whisky Concierge in 2014. Be sure to pick up a bottle of this superb whisky today!

Burley aroma of roasted grains, cinnamon, oatmeal, orange peel and light smoke. The body is full of complexity, with notes of honey, apple pie, sherry and butterscotch, and leads to a hearty finish complete with smoked meats, pepper and tanned leather.