Learn more
Size750mL Proof100 (50% ABV) *Please note that the ABV of this bottle may vary
Peated to 40 phenol ppm, this whisky was crafted by a master distiller with over five decades of experience using 100% Scottish Barley that matures in the lochside village of Port Charlotte before being bottled at the Bruichladdich distillery using Islay spring water.
Notify me when this product is back in stock. 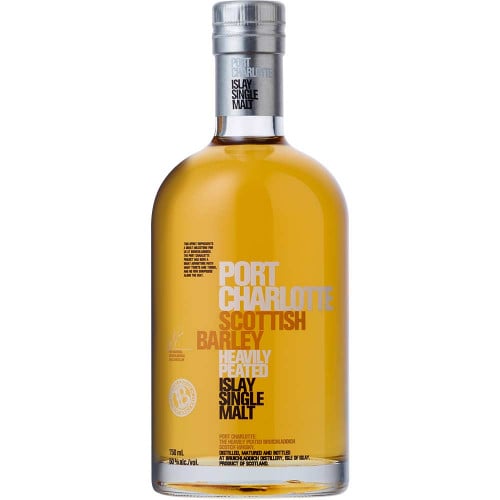 Bruichladdich Port Charlotte Scottish Barley Whisky is a cuvee crafted from casks hand-picked by master distiller Jim McEwan to combine floral flavors with classic heavy peat. After the grains are milled and mashed, they are fermented in the distillery's original washbacks, which are made of Douglas Fir. The wood from the washbacks absorbs heat generated during fermentation, and allows for a longer, slower fermentation process as compared to steel, resulting in a more flavorful and rich whisky.

Port Charlotte is trickle distilled from 100% Scottish Barley and matures in the lochside village of Port Charlotte before being bottled at the Bruichladdich distillery using Islay spring water.

Port Charlotte Scottish Barley is a rich blend with an aroma of peat smoke, crushed sea shells, and plump dates, giving way to a palate of vanilla, toffee, and smoky-sweet barley with a citrusy finish mellowed by oak.

Bruichladdich Port Charlotte Scottish Barley is a rich blend with an aroma of peat smoke, crushed sea shells, and plump dates, giving way to a palate of vanilla, toffee, and smoky-sweet barley with a citrusy finish mellowed by oak.