Be the first to review this product
The official NASCAR moonshine pays tribute to the World's Fastest in the form of an unaged corn whiskey that takes you back to a simpler time.
Add to Wish List
Notify me when this product is back in stock.

In the mid-1800s, a handful of European settlers from Ireland and Scotland made their home in the Great Smoky Mountains of Tennessee. Due to the abundance of sugar maple trees in the area, the settlers affectionately renamed it the "Sugarlands." To this day, the area’s rich land, abundance of corn and, of course, predominance of sugar maple trees have made the Sugarlands a moonshiner’s paradise.

Opened in downtown Gatlinburg, Tennessee in 2014, Sugarlands Distilling Company produces craft-quality moonshine and whiskey "with one foot firmly planted in the past and the other in modern times." Using an artisanal stone mill to grind grains like corn and rye into meal, Sugarlands Distilling Company then mixes in pure Smoky Mountain water to create the mash. From there, the liquid is transferred to the fermenter to simmer for a few days, and when the time is right, that "wash" is pumped into the copper pot still where it is heated and distilled. The alcohol vapor filters through the copper pipes and rises up through the plates of the distillation column, down through the chilling column to cool and is finally poured out of the Spirit Safe.

Sugarlands Spirits are known for their partnerships with country star Cole Swindell and the Discovery Channel television show "Moonshiners" as well as being the official NASCAR moonshine. Sugarlands Shine Daytona International Speedway Corn Whiskey is the second in this limited edition series that follows last year's Talladega Superspeedway 50th Anniversary and pays tribute to the World's Fastest in the form of an unaged corn whiskey. This collector's series small-batch whiskey is a nod to traditional bootlegged spirits from Appalachia that takes you back to simpler times with a sweet and crisp corn flavor. Comes packaged in a Mason jar with a Daytona-themed label.

A nod to simpler times, this unaged whiskey is pleasantly fragrant with a crisp corn sweetness and a smooth and refreshing finish. 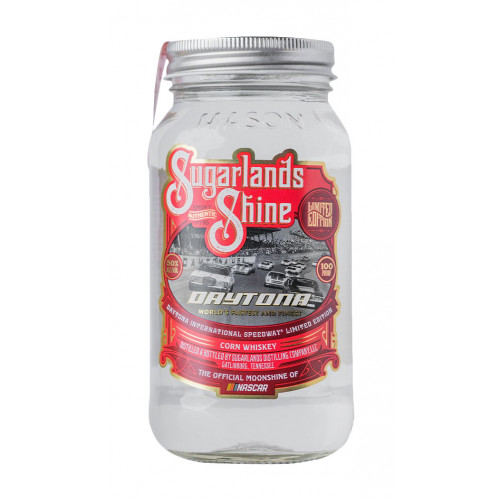