Size750mL Proof115.8 (57.9% ABV)
This independent release from W.M. Cadenhead captures the essence of Strathclyde’s single grain magic. Bottled at a punchy 115.8 proof.
Notify me when this product is back in stock. 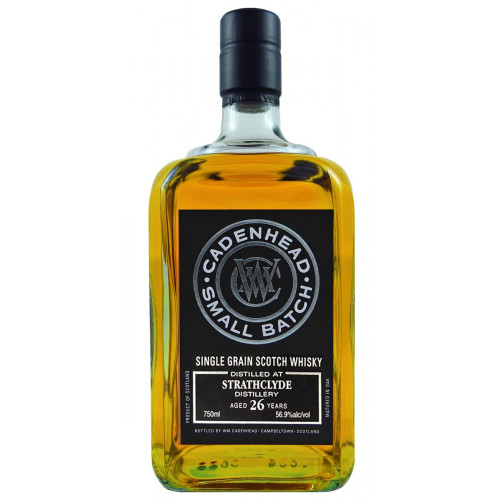 Strathclyde distillery was built on the site of an old cotton mill, in 1927 by London distiller Seager Evans. The facility was originally built as a neutral grain spirit producer for gins. Strathclyde is now Glasgow’s most prosperous distillery. In 1936, Seager Evans moved made the move into the Scotch industry with the purchase of the brand Long John.

Strathclyde distillery sits in the Gorbals located in the Lowlands, on the south side of the River Clyde opposite Glasgow Green park. Over the years, Strathclyde underwent numerous ownerships, before ending up within Allied Distillers. By this time Strathclyde had been supplying some of their single grain to big names such as Ballantine’s and Teacher’s. Strathclyde is now part of the Chivas Brothers stable.

After Port Dundas shut down in 2009, Strathclyde was the only remaining whisky distillery in Glasgow for several years. Strathclyde sources its water from the Loch Katrine. Their whiskies are distilled through a 2 column system that has an analyzer and rectifier column, the columns once used for neutral production have since been mothballed.

The entire grain whisky production at Strathclyde is intended for developing blends, but there have been independent and private bottlings. This single grain Strathclyde whisky was released by Cadenhead’s. W.M. Cadenhead is an iconic whisky bottler. The original company was established by William Cadenhead in 1842.

This special small batch release was matured in a single fresh first fill bourbon cask for 26 years. Only 168 bottles of this whisky exist in the world. "A fantastic rich aromatic, smooth Strathclyde…This vintage has a deep orange amber color that almost looks like sherry cask with some rather amazing sherry-like notes after it's opened in the glass for about 10-15 mins. Very enjoyable indeed" (producer).

The nose is rich and full. Golden rum notes begin the journey with this elegant single grain. Roasted peanuts with fresh brandy snaps and banoffee pie. Some aniseed notes with hints of treacle toffee, some fresh mint lifts the palate slightly, followed by banana yogurt to give the middle palate a nice big mouthfeel. The finish has some soft olive oil notes that will make way for some vanilla custard with some rather nice raspberry sorbet.