Learn more
Size750mL Proof124.6 (62.3% ABV) *Please note that the ABV of this bottle may vary
Aged for nearly four years, the first cask of this single barrel, single malt whisky is available exclusively through Caskers. 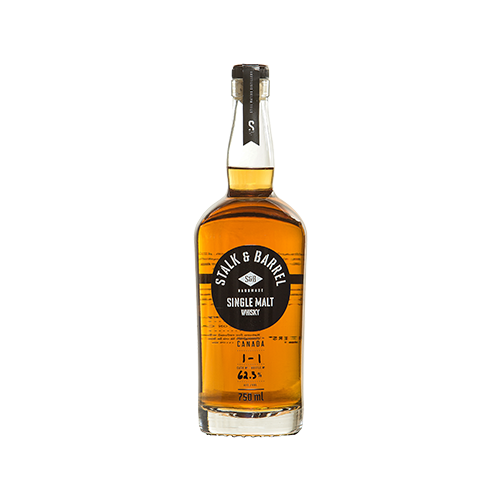 Situated on the shores of Lake Ontario and intersected by three rivers, Toronto was founded by Lieutenant Governor John Graves Simcoe, who named it the capital of Upper Canada in the late 18th century. At the time, the city's central location and easy access to freshwater made it a bustling hub for commercial activity, particularly distillation. In 1837, William Gooderham and John Worts established the Gooderham and Worts Distillery in downtown Toronto. As some two hundred others followed suit, downtown Toronto became known as "The Distillery District." Strict regulations and burdensome taxation, however, caused many distilleries in Canada to close their doors.

Today, in an industrial complex on the city's outskirts, Barry Bernstein and Barry Stein, the founders of Still Waters Distillery, own and operate the last remaining distillery in Toronto.

"We began the business in 2005 as importers of Single Malt Scotch Whisky," says Bernstein. "Our passion has always been whisky and we always dreamed of making our own. As we learned more about the business, we decided to take the plunge and transform our business into a full fledged distillery."

Still Waters' Stalk & Barrel Single Malt Whisky Cask No. 1 — available exclusively through Caskers — is made from 100% Canadian two-row malted barley. "Our spirits are made by hand from grain to glass," says Bernstein. After the barley is malted, it is milled and mashed before being fermented for approximately five days using a proprietary strain of yeast. Following fermentation, the wash is twice distilled through Still Waters' custom-made, copper-pot still imported from Germany.

Once the whisky has been distilled, it is aged for nearly four years in used, American bourbon casks. "We're able to distill and start maturing about two barrels of whisky each week," says Bernstein, noting that Still Waters' is one of Canada's first microdistilleries. "We set out to restore the tradition of small batch craft distilling in Ontario that goes back centuries. This whisky is the culmination of four years of hard work and patience."Once the whisky has matured, each cask is bottled at cask strength by hand (no artificial colors or additives of any kind are used).

This feature of Stalk & Barrel Single Malt Whisky is bottled from a single cask — Cask No. 1 — and has an aroma of honeydew, oak and cloves, which are followed by notes of butterscotch, crème brÃ»lée and toasted marshmallows. The finish, which is slightly chewy, lingers nicely and has a touch of spicy cinnamon.

Aroma of honeydew, oak and cloves, which are followed by notes of butterscotch, crème brÃ»lée and toasted marshmallows. Finish, which is slightly chewy, lingers nicely and has a touch of spicy cinnamon.