Learn more
Size750mL Proof112.8 (56.4% ABV) *Please note that the ABV of this bottle may vary
Aged for 19 years in a used sherry cask, this whisky was bottled at cask strength.
Notify me when this product is back in stock. 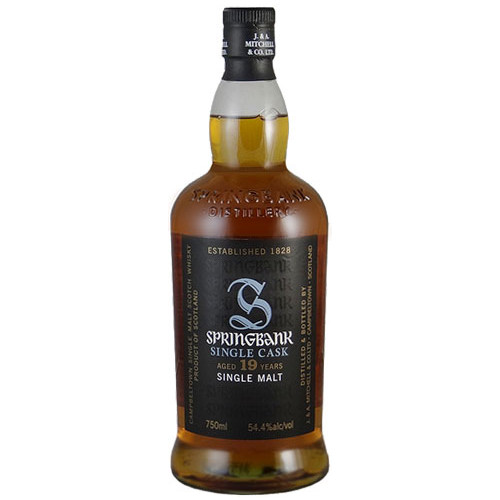 In 1828, Springbank Distillery was founded on the site of Archibald Mitchell's illicit still in Campbeltown (today, Mitchell's great-great-great-grandson owns the distillery). Within ten years, its whiskey was so well-regarded that a blender by the name of Johnnie Walker [link: https://www.caskers.com/johnnie-walker-platinum-label-scotch-whisky/] purchased 118 gallons of whisky from Springbank at 43 pence a gallon.

Following distillation, the whisky is aged for 19 years in a single cask that was previously used to mature sherry. This sherry cask contributes notes of red plums, berries, dark citrus and caramel to the whisky. In addition, the strong, perennial sea winds along Campbeltown add a hint of salty tang to the whisky as it matures. Following its beautyrest, the whisky is bottled at cask strength without the use of any artificial coloring or chill filtration.

Aroma of red fruits and berries. Waves of sherry, salty tang, apricots, citrus and honey. Finish is lush and thick, with a touch of tang.