Learn more
Size750mL Proof105.4 (52.7% ABV) *Please note that the ABV of this bottle may vary
Aged for 12 years, this whisky is finished in casks that were formerly used to mature calvados, a type of French brandy made from apples.
Notify me when this product is back in stock. 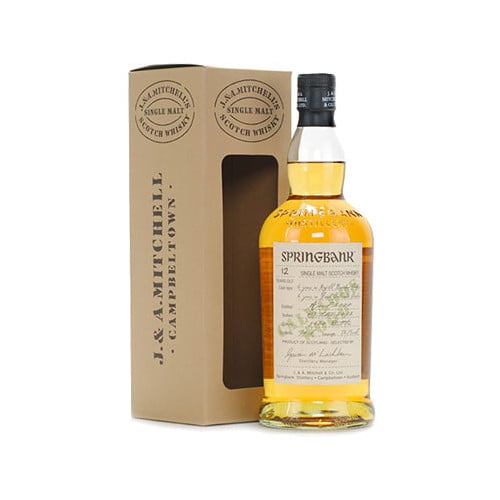 In 1828, Springbank Distillery was founded on the site of Archibald Mitchell's illicit still in Campbeltown (today, Mitchell's great-great-great-grandson owns the distillery). Within ten years, its whisky was so well-regarded that a blender by the name of Johnnie Walker purchased 118 gallons of whisky from Springbank at 43 pence a gallon.

Following distillation, Springbank 12 Year Old Single Malt Scotch Whisky Calvados Finish is matured for six years in refill American oak casks that were previously used to mature bourbon. After its initial maturation, the whisky is double-barreled, or finished, in ex-calvados casks for an additional six years (calvados is a type of French brandy distilled from apples). "We're always looking for new types of casks to try and the calvados is the latest in the series," says Gavin McLachlan, Springbank's Distillery Manager. "The important thing from our point of view when it comes to buying casks is that, first of all, the physical quality of the cask is sound—the cask is well-made and won't leak. We also take into account the quality of the product which the cask previously contained and, obviously, the flavor that product will give. The calvados casks we used for this bottling ticked all of those boxes."

Springbank 12 Year Old Single Malt Scotch Whisky Calvados Finish has a golden maple color, along with an aroma of citrus, apples and butterscotch. The aroma gives way to notes of creamy vanilla, apple cider, pears and figs on the palate, which are complemented by a touch of spices. The finish is long and satisfying, with notes of red fruits, orange marmalade and honeyed oak.

Pick up a bottle of a rare, calvados finish whisky today!

Golden maple color. Aroma of citrus, apples and butterscotch. Notes of creamy vanilla, apple cider, pears and figs on the palate, which are complemented by a touch of spices. Finish is long and satisfying, with notes of red fruits, orange marmalade and honeyed oak.