Learn more
Size750mL Proof98 (49% ABV) *Please note that the ABV of this bottle may vary
Crafted in the heart of Sonoma County, this bourbon is made from a of American yellow corn, Canadian winter wheat and malted barley from Wyoming.
Notify me when this product is back in stock. 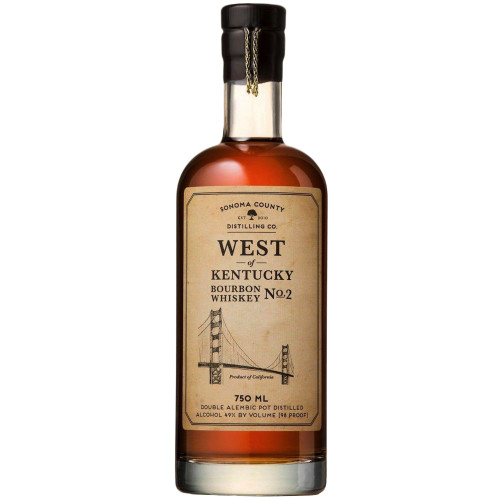 About Sonoma County West of Kentucky No. 2 Bourbon Whiskey

Situated in the heart of northern California, the Sonoma County Distilling Company was founded in 2010 by California native Adam Spiegel. "Our goal is to produce whiskey the way it was meant to be made," says Spiegel. "We use traditional methods and equipment for distillation whose quality has withstood the passage of time, and we produce damn good whiskey in-house, from grain to glass."

Sonoma County Distilling Co.'s West of Kentucky Bourbon is released annually, and this particular release is made from a mash of American yellow corn, Canadian winter wheat and malted barley from Wyoming. Once the grains arrive at the distillery, they are mashed and fermented before being twice distilled through a copper-pot still. The still, which is heated by a direct flame, requires a great degree more attention and skill than modern, steam-heated stills. In addition, the uneven heat produced by the central flame source produces a more unique and more textured whiskey.

Following distillation, the bourbon is matured in small, new charred American oak casks for just over one year and then aged further in full sized, used bourbon barrels. The smaller barrel-size results in greater surface contact between the oak and results in a faster maturation process. This old wood barrel aging insures the spirit is not over-oaked and given more time to age and oxidize. Once the bourbon has matured, it is bottled, labeled, and waxed by hand.

Sonoma Distilling Co.'s West of Kentucky Bourbon has a golden straw color, along with an aroma of corn, baked biscuits and exposed oak. The aroma gives way to notes of honey and cloves on the palate that are complemented by touches of vanilla and caramel. The finish is bold and refreshing, with a hint of woody allspice.

Golden straw color. Aroma of corn, baked biscuits and exposed oak. Notes of honey and cloves that are complemented by touches of vanilla and caramel. Finish is bold and refreshing, with a touch of woody spices.