Rating:
87%
(2)
Blended from several old and young high-rye bourbons, this rich, sweet, and creamy spirit is bottled at around 116 to 117 proof. It has won a Double Gold Medal at the 2017 and 2020 editions of the San Francisco World Spirits Competition.
$113.99
Add to Wish List

They have two brands under their belt now, both with several medals from the San Francisco World Spirits Competition: Silver Dollar American Vodka and Smoke Wagon. The latter comprises several bourbons, including the Smoke Wagon Uncut Unfiltered Bourbon. The goal with this expression was to bring the blending philosophy from their Small Batch into a high-proof bourbon meant to be drunk neat. Based on a blend of old and young high-rye whiskeys, it's rich, sweet, and creamy. It has won the coveted Double Gold medal at the 2017 and 2020 editions of the San Francisco World Spirits Competition.

The nose of this bold bourbon opens with fruity cherry, apple, and sweetness with some citrus, pine, and baking spice in the background. The spice explodes on the palate with spice, continuing with a fruity sweetness and apples. Finishes smooth with lingering sweetness and spice. 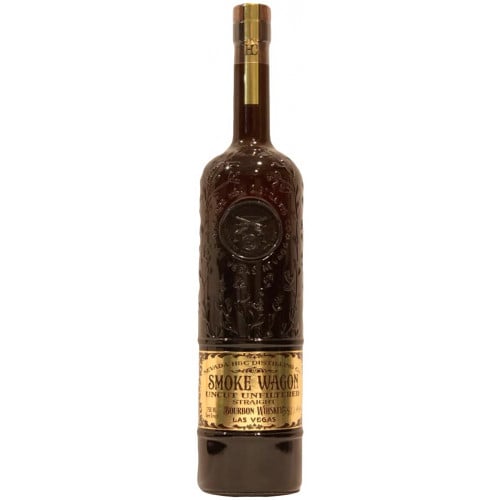