Size750mL Proof88 (44% ABV)
This gin earned four stars from F. Paul Pacult's Spirit Journal and the Gold Medal at the 2012 San Francisco World Spirits Competition.
Notify me when this product is back in stock. 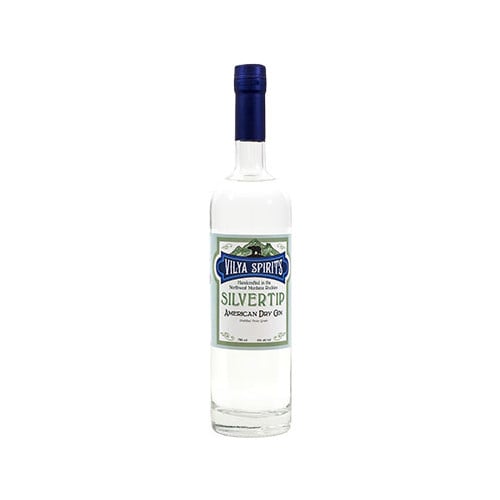 Over two decades ago, Joe and Jules Legate began cultivating an herb garden on their 15-acre farm in Kalispell, Montana. Situated in the foothills of the Rocky Mountains, Kalispell's alpine climate, Jules thought, would produce amazing herbs that she could use to make a type of herbal tea. "But Joe has been brewing beer for as long as I can remember,"she says, "and had the idea to use my garden for something very different."

Vilya Distillery's Silvertip American Dry Gin is made with juniper, anise, coriander, caraway, orris and angelica, much of which is sourced from the Legates' own farm. "Sometimes we go hiking and are able to pick some wild herbs like angelica,"Jules says, "which we can also use when making the gin." After harvesting the botanicals, Jules prepares and dries them by hand. The herbs are then placed into the vapor basket of a 200-liter, hand-hammered copper alembic still the Legates imported from Portugal and are distilled with grain spirits.

After distillation, Jules brings the gin to 88 proof using pure Rocky Mountain snowmelt. "As much as possible, we're a green company,"she adds. "Whatever water we have left over after distilling we use to water plants and we put the spent herbs into a compost pile."

Silvertip Gin has a floral aroma with notes of anise and angelica, and a creamy, medium-dry body. Named after the grizzly bears often spotted in Montana's forests (the bears are referred to as "old silvertips"), the gin earned the Gold Medal at the 2012 San Francisco World Spirits Competition.

Floral aroma with notes of anise and angelica, and a creamy, medium-dry body.