Learn more
Size750mL Proof92 (46% ABV) *Please note that the ABV of this bottle may vary
This Signatory Glenlossie vintage was distilled in 1992, aged in hogshead barrels and bottled in 2011.
Notify me when this product is back in stock. 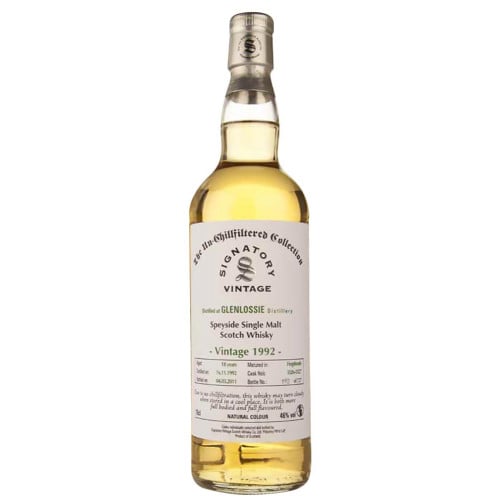 The Glenlossie Distillery is situated in the east of Speyside, sharing the building with the Mannochmore distillery. John Duff, former manager of the GlenDronach Distillery, built Glenlossie in 1876, managing it until getting involved with Longmorn Distillery, in 1896.

Glenlossie whiskies are crafted with water from the Bardon Burn, using three pairs of pear-shaped stills, with 15,600 and 13,500 liters respectively. The maltings are sourced from Elgin, primarily Burghead Maltings. Glenlossie single malts have a signature lightly peated quality. This Signatory Glenlossie vintage was distilled in 1992 and aged in hogshead barrels and bottled in 2011.

Grassy notes, tobacco and spice on the nose. The palate is bold and spicy with notes of black pepper, citrus, sherry spice, and nutty notes. The finish has a burst of citrus.