Caskers Rewards members earn up to 4 store points back when buying this bottle.
Size750mL Proof101 (50.5% ABV)
Seven Jars captured the essence of Ava Gardner in this exquisite spirit. Aged for at least 5 years, it has an excellent aroma and flavor—rich, smooth and with just enough 'kick' to give you a buzz.
Notify me when this product is back in stock. 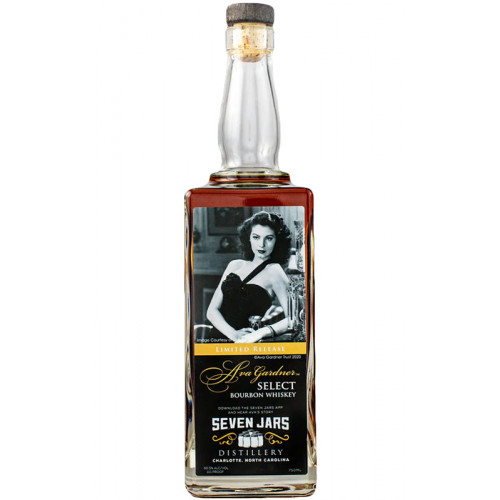 This 101 Proof Bourbon is named in honor of actress Ava Gardner, who first gained fame for her starring role as Kitty Collins in 1946 classic “The Killers”. She went on to appear in over 60 films and became synonymous with the term "Femme Fatale" of the Film Noir era. Her image from the movie is featured on each bottle.

Boasting a fiery temper and fondness for whisky, she was certainly ahead of her time. Ava's personality is reflected in this premium spirit—smooth, flavorful, and with just the right amount of ''kick''.

Additional variants will be released at a later date, each bearing different images of Ava Gardner and having a unique flavor profile.

On the nose, Seven Jars Ava Gardner Select Bourbon Whiskey really impresses with notes of sweet maple syrup, spice, and ethanal. There are also floral notes of dried fruit, apricot, and a light green apple. The palate is inviting and offers flavors of caramel & graham cracker flavor, mixed with notes of toffee and green apple, culminating in a surprising finish with spice and dark roasted barley notes.