Learn more
Size750mL Proof96, 90.4, 90.6 (48%, 48.2% and 48.3% ABV) *Please note that the ABV of this bottle may vary
It really doesn't get much better than this. This set of three epic Macallans are an artefact of Macallan's commitment to the art of whisky making.
Notify me when this product is back in stock. 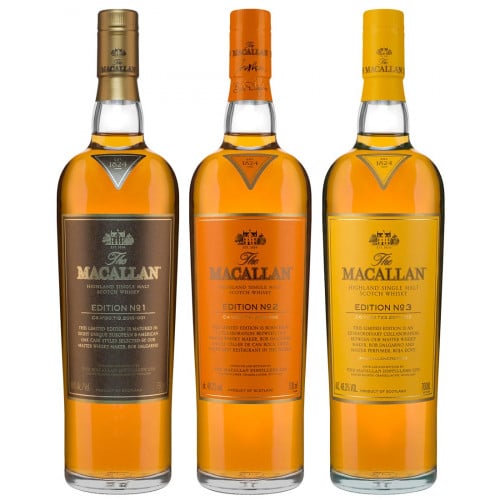 Macallan Edition No. 2 is the second release in a new annual limited released from the esteemed distillery. Edition No. 2 is a collaboration between the Macallan Master Whisky Maker, Bob Dalgarno, and the Roca brothers, whose restaurant El Celler de Can Roca has been named best restaurant in the world twice.

Macallan Edition No. 3 is the third release of The Macallan’s wood centric series. Production of this refined spirit was overseen by Roja Dove, Master Perfumer, and Bob Dalgarno, Macallan Whisky Maker. Dalgarno hand selected fewer than one percent of the casks maturing on the Macallan estate in order to craft this rare whisky. This Edition No. 3 is a harmonious composition of six American and European oak casks, showcasing ethereally sweet, floral notes in the fore, and base notes of vanilla, fruit, and oak.

It really doesn't get much better than this. This set of three epic Macallans are an artefact of Macallan's commitment to the art of whisky making.