Size750mL Proof88.6 (44.3% ABV)
Aged for a minimum of 40 years, this whisky earned the Cask Strength Single Malt Scotch Whisky Trophy at the International Wine and Spirits Competition in 2013.
Notify me when this product is back in stock. 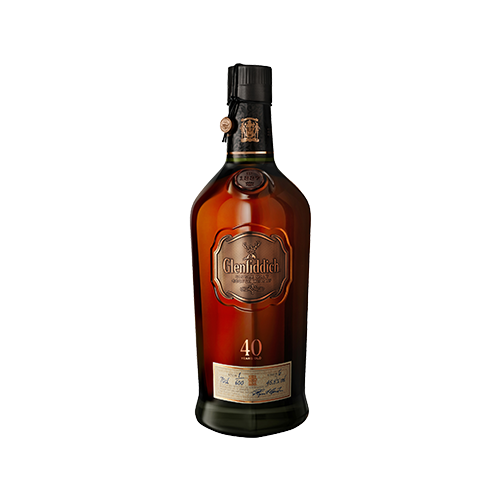 Glenfiddich 40 Year Old Single Malt Scotch Whisky is made from the vatting of a select number of casks maturing in the cellars of Glenfiddich Distillery, each of which is at least 40 years old. The whisky has an aroma of dates, figs and dried apricots that gives way to notes of dried fruits, roasted coffee and baked apples on the palate. The finish is endless and complex, with touches of dark chocolate, faint peat and butterscotch.

The whisky earned the Cask Strength Single Malt Scotch Whisky Trophy at the International Wine and Spirits Competition in 2013. In addition, only 600 bottles of the whisky — each of which is individually numbered and wrapped in a calf-leather case — are released each year. Pick one up today!

Aroma of dates, figs and dried apricots. Notes of dried fruits, roasted coffee and baked apples on the palate. Finish is endless and complex, with touches of dark chocolate, faint peat and butterscotch.