Size750mL Proof86 (43% ABV)
Aged for forty years, this single malt Scotch whisky comes with a unique nosing and tasting glass.
Notify me when this product is back in stock. 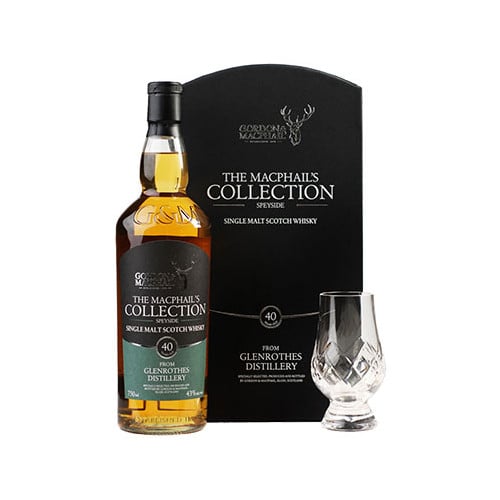 Glenrothes Single Malt Scotch Whisky is made from plump, ripe Scottish barley that is malted and fermented for up to 55 hours using water sourced from the Ardcanny and Brauchhill springs (the springs are situated just a few miles upstream from the distillery). Following fermentation, the grains are twice distilled through Glenrothes' copper-pot stills. The stills, which were designed and fashioned to be exact replicas of the original stills installed in 1879, are incredibly tall and uniquely shaped, which contributes to the overall light and sweet flavor of the whisky. After distillation, The Glenrothes' stillmen remove the heads and tails of the distillate and preserve only the "hearts"for maturation (the hearts comprise less than 20% of the entire distillate).

Glenrothes 40 Year Old Single Malt Scotch Whisky (G&M Bottling) was distilled in 1973 and matured for forty years in first fill sherry casks. As a result of this incredibly long maturation process, the whisky has an aroma of toasted malt, ripe fruits, pears and heathered honey. Notes of dark plums, espresso beans, berries and dark chocolate dominate the palate, and lead to a finish accented by hints of vanilla, milk chocolate, citrus and butterscotch.

In addition to a forty year-old bottle of Scotch whisky, this feature includes a unique nosing and tasting glass. Pick up a gift set today!