Size750mL Proof110 (55% ABV)
Matured in heavily charred casks under the intense Kentucky sun, this single-cask bourbon is made by a master distiller with over 50 years of distilling experience.
Notify me when this product is back in stock. 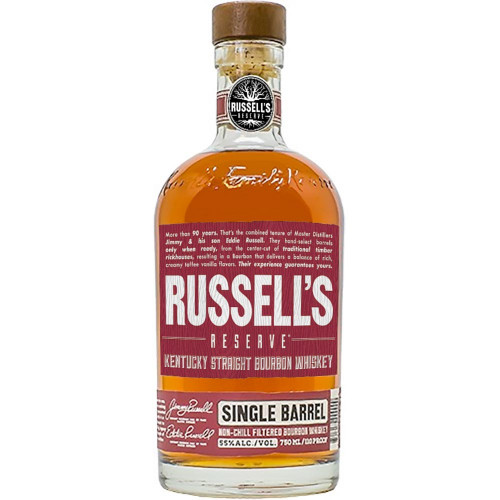 Russell's Reserve Small Batch Single Barrel Bourbon is made in Kentucky using a generations-old mash recipe. After the grains are harvested, they are mashed and fermented before being distilled to a lower proof than at other distilleries in Kentucky (meaning that less water is used in diluting the bourbon after it is matured).

Following maturation, Master Distiller Jimmy Russell, along with his son Eddie Russell, hand-select the best barrels for bottling. As a result of being the product of a single cask, rather than a blend of casks, each bottle of Russell's Reserve Single Barrel Bourbon has its own unique characteristics, while still maintaining the rich and creamy style that is endowed by years of maturation in the Kentucky heat.

Surprisingly subtle aroma. Notes of cinnamon, oak and spicy wood are nicely balanced with undertones of vanilla, crème brûlée and honey, and ultimately lead to a deep and rich finish.