Caskers Rewards members earn up to 200 store points back when buying this bottle.
Size1000mL Proof80 (40% ABV)
Blended from whiskies aged at least 40 years, this whisky earned a 94 point rating from Whisky Advocate, which called it a “work of genius.”
Notify me when this product is back in stock.

Caskers Rewards Caskers Rewards members earn up to 200 store points back when buying this bottle. Learn more
Out of stock
Skip to the end of the images gallery 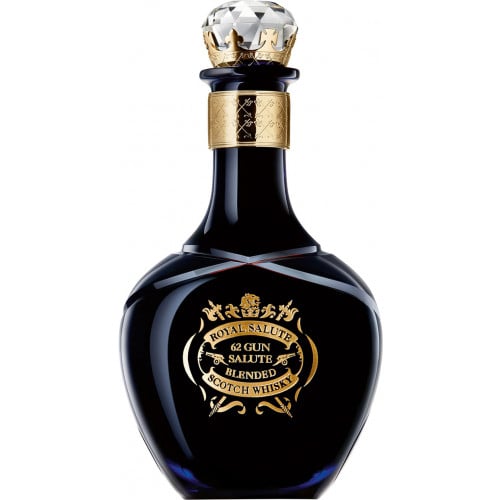 Named after the gun rounds fired on Royal anniversaries at the Tower of London, Royal Salute 62 Gun Salute Scotch Whisky is the oldest whisky ever released by Royal Salute. Over the years, only four men — Charles Julian, Allan Baillie, Jimmy Lang and Colin Scott — have held the honor of Master Blender for Royal Salute, and each of their hands went into selecting this incredible blend, which contains various whiskies aged for a minimum of 40 years.

Royal Salute 62 Gun Salute Scotch Whisky has an aroma of dark chocolate, espresso, sherry and brazil nuts, which leads to a decadent palate filled with more toffee, chocolate bark and dark fruits. The finish is chewy and and seemingly everlasting.

Packaged in an elegant blue decanter, painted and inlaid with 24-carat gold, this whisky earned a 94 point rating from Whisky Advocate, which called it a “work of genius.”

Royal Salute traces its roots back to 1801 when Chivas Brothers was established as an upscale grocery store in the Scottish town of Aberdeen. In addition to selling high-end food, coffee and spices, the store offered French brandies and Caribbean rums to its wealthy clientele. Widely considered the finest purveyors in all of Scotland, in 1843 Chivas Brothers was granted a royal warrant to provide goods to Queen Victoria.

James and John Chivas, who joined the family business in the mid-19th century, noticed a growing demand among their affluent customers for a smoother whisky. Unsatisfied with the products currently available on the market, James and John began experimenting with their own proprietary blends, quickly building a reputation as pioneers in the art of whisky blending. The duo released their first blend, Royal Glen Dee, in the 1850s, followed shortly thereafter by Royal Strathythan, each providing a springboard for future Chivas Brothers creations.

Today, along with the Royal Salute brand, Royal Salute calls Strathisla Distillery in Speyside, Scotland its home. There, Master Distiller Colin Scott, who has over 40 years of experience in the industry, continues the Chivas Brothers tradition which began nearly two centuries ago. Launched in 1953 to commemorate Queen Elizabeth II’s coronation, Royal Salute has since become an international symbol for luxury whisky.
Explore all Royal Salute bottles >>

Aroma of dark chocolate, espresso, sherry and brazil nuts, which leads to a decadent palate filled with more toffee, chocolate bark and dark fruits. The finish is chewy and and seemingly everlasting.