Size750mL Proof95.4 (47.7% ABV)
This exquisite single malt was distilled on the Isle of Mull and aged for a whopping 42 years. Bottled at a cask strength of 95.4 proof, only 650 bottles of this well-aged, sherried whisky were produced. 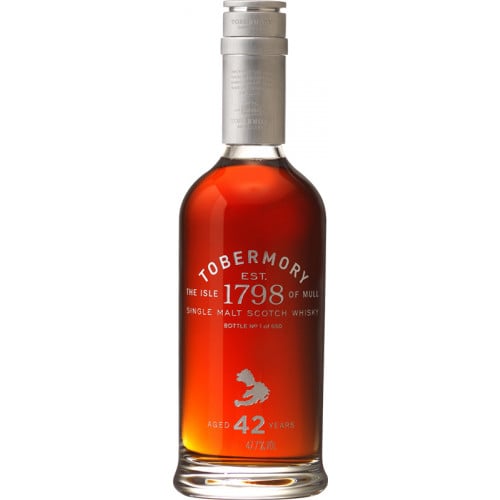 After being distilled on the Isle of Mull, Tobermory 42 was aged for a whopping 42 years and bottled at a cask strength of 95.4 proof. Released in 2016, the single malt has no added coloring and isn't chill-filtered. Only 650 bottles of this exquisitely rich sherried whisky were produced.

Get one of only 650 bottles of this well-aged single malt today!

The nose is rich with sherry aromas of dried fruit and raisins, along with chocolate, tobacco, nuts, and licorice. The palate is equally fruity and nutty with charred oak, dark fruit, berries, and a touch of spice that lingers through the finish with a balance of sweet sherried notes, rich chocolate, and coffee.