Size700mL Proof86 (43% ABV)
The 2021 release of Oban Distillers Edition builds on their core 14-year-old single malt. This one is finished in ex-Montilla Fino sherry casks, resulting in a rich and explosive single malt with a balance of sweetness, fruit, and maritime notes.
Notify me when this product is back in stock. 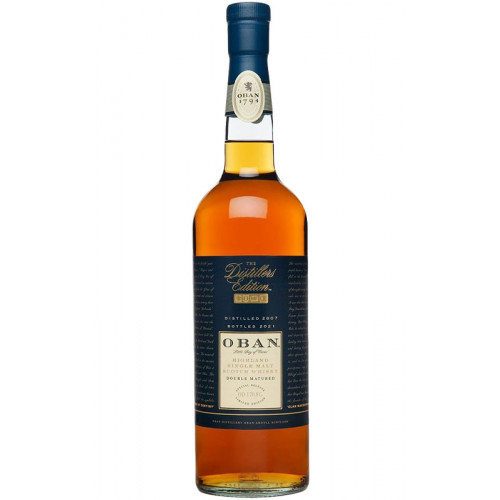 Oban Single Malt Whisky is made using 100% barley, which is malted to the distillery's exact specifications. After the barley is malted, it is partially germinated and gently dried over a peat kiln, giving it a slightly smoky, malty flavor profile. Then, the malted barley is mashed and fermented before being twice-distilled through Oban's lantern-shaped copper-pot stills. The stills are among the smallest in Scotland, limiting Oban's production to just 650,000 liters of whisky annually.

Distilled in 2007, Oban Distillers Edition 2021 Single Malt Whisky is aged for 14 years in oak casks. During its beauty rest, the whisky is touched by its environment and geography — the warm, salty Gulf Stream and mild, temperate climate of Oban are reflected in the whisky. After its initial maturation, the whisky is finished in ex-Montilla Fino sherry casks. Bottled at 86 proof, it's a rich and explosive single malt with a balance of sweetness, fruit, and maritime notes.

Get your bottle of this single malt today!

The nose is complex and fruity with brine, orange zest, and a gentle touch of peat. The palate mirrors the aromas with fruit, grapes, brine, and malt, culminating in a pleasantly sweet and oaky finish with a hint of coffee.