Size750mL Proof86 (43% ABV)
Aged for a minimum of 18 years, this whisky earned the Double Gold Medal at the San Francisco World Spirits Competition in 2011 and 2012.
Notify me when this product is back in stock. 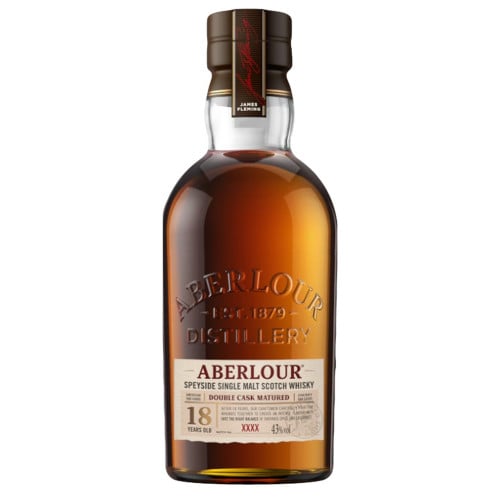 Aberlour Single Malt Whisky is made exclusively from Scottish barley, which is malted for approximately seven days before being dried above an unpeated kiln. Once the barley has been dried, it is milled and mashed with water drawn from St. Drostan's Well. The well, which has been the distillery's source for water for over a century, was named after a missionary who used water from the well to baptise inhabitants in 580 AD. After the barley has been mashed, it is fermented before being twice-distilled through Aberlour's copper-pot stills. The still's enjoy broad bases to expose as much direct heat as possible to the wash, and are equipped with swan-shaped necks which capture only the most pure vapors during distillation.

Aberlour 18 Year Old Single Malt Scotch Whisky has a rich aroma of toffee and butterscotch, along with hints of peaches and orange. The aroma gives way to a perfect body, with notes of soft apricots, vanilla cream, red fruits, old leather and rich tobacco on the palate and an endlessly complex, balanced finish.

Aberlour 18 Year Old earned the Double Gold Medal at the San Francisco World Spirits Competition in 2011 and 2012, and earned a score of 91 points from Whisky Advocate.

Rich aroma of toffee and butterscotch, along with hints of peaches and orange. Perfect body, with notes of soft apricots, vanilla cream, red fruits, old leather and rich tobacco on the palate and an endlessly complex, balanced finish.