Learn more
Size750mL Proof115 ( 57.5% ABV) *Please note that the ABV of this bottle may vary
This cask-strength single malt comes from the Royal Lochnagar Distillery. Crafted with the crystal-clear water from the Scarnock springs and aged exclusively in refill casks, the 115-proof expression is bright and lush with notes of fruit and citrus.
Notify me when this product is back in stock. 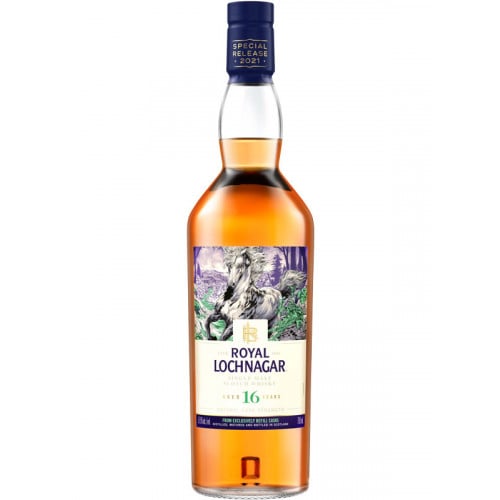 The history of Royal Lochnagar dates back to 1826 when James Robertson took it upon himself to build a distillery at the foot of the Cairngorm mountains. Nestled between the Lochnagar mountain, the River Dee, and the Balmoral Castle, the distillery would be able to harness the nature with the crystal-clear water from the Scarnock springs. After the distillery was burnt down ― supposedly by Robertson's competitors ― it was rebuilt in 1845. In 1848 Queen Victoria visited the distillery. Having been impressed, she issued a Royal Warrant to the distillery, adding "Royal" to its title.

The distillery was passed down through generations, closing its doors when World War II broke out. In 1963 it was reconstructed with special care taken to retain its traditional features. Today the distillery is owned by the Abergeldie Estate and leased by Diageo, mostly producing whisky that is used in Johnnie Walker.

Diageo's 2021 Special Releases Collection follows the theme of hidden stories within iconic distilleries, connected via mythical creatures depicted on the bottles. The Royal Lochnagar 16 Year Old Special Release is a cask-strength expression that was aged in refill casks before being bottled at 115 proof. It features a bright and sweet profile with fruit, citrus, and a creamy smoothness that befits its royal stature.

Opening with hints of orange zest and green apple on the nose, the whisky has a gentle sweetness on the palate that is balanced by fruity acidity. The finish is smooth and pleasantly sweet and bright with lingering white grape notes.