Size750mL Proof80 (40% ABV)
Aged for an average of 15 years through a solera, this rum was named the "Best Rum" at the San Francisco World Spirits Competition. 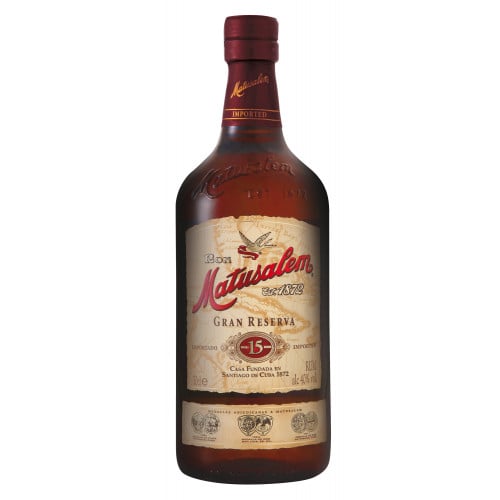 In 1872, Benjamin and Eduardo Camp emigrated from Spain to Cuba and established the Matusalem Rum Distillery in Santiago de Cuba. The brothers had been distilling spirits in Spain for decades, and brought with them the knowledge and expertise they had earned from distilling, solera-aging and blending Spanish brandy. For nearly a century, the Camp Brothers prospered and their rum became synonymous with the finest spirits produced in the Caribbean. Following the Cuban Revolution in 1959, however, the Matusalem Rum Distillery went into exile. Today, the distillery operates in the Dominican Republic and continues to the use the same recipes, distilling techniques and blending principles that the Camp Brothers established over 140 years ago.

Matusalem 15 Year Old Gran Reserva Rum is made from Caribbean molasses, which is harvested and distilled before being solera-aged for an average of 15 years. Solera aging is a process that has generally been reserved for aging cognacs, ports and sherries. It involves filling a series of casks at different intervals over a long period of time. As rum from the oldest cask is emptied and bottled, the cask is re-filled with an equivalent amount of rum from the second-oldest cask in the solera. This cascading effect continues until the youngest cask in the solera is filled with new rum. As a result, no cask in the solera is ever fully emptied. In addition, as the younger rum cascades through the solera, its average age and complexity gradually increases over time.

Matusalem 15 Year Old Gran Reserva Rum is matured for an average of 15 years through the distillery's solera. As a result, the rum has an aroma of woody tannins, dry citrus and rich caramel. The aroma gives way to notes of oak, tropical fruits (particularly bananas and papaya), dates and raisins on the palate, and finishes with touches of chocolate, caramel and citrus.

The rum earned the Double Gold Medal at the San Francisco World Spirits Competition, where it was named the "Best Rum." In addition, it earned a score of 90-95 points from Wine Enthusiast.

Aroma of woody tannins, dry citrus and rich caramel. Notes of oak, tropical fruits (particularly bananas and papaya), dates and raisins on the palate. Finishes with touches of chocolate, caramel and citrus.