Size750mL Proof80 (40% ABV)
Aged in used bourbon casks, this rum earned a score of 93 points at the Ultimate Spirits Challenge in 2011.
Notify me when this product is back in stock. 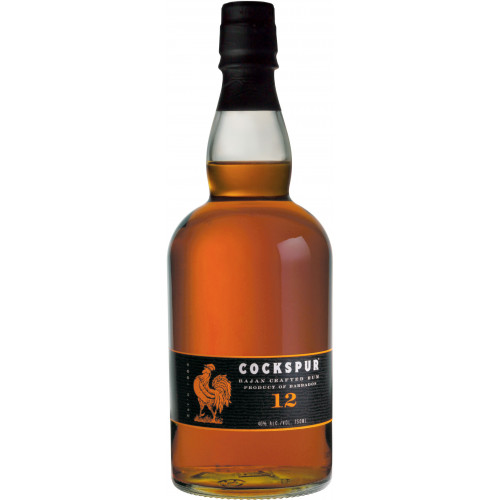 In the late 19th century, a Danish businessman by the name of Valdemar Hanschell founded a ship chandlery on the island of Barbados. The chandlery, which supplied boats passing through the Lesser Antilles with supplies sucumh as whale oil, rope and fresh food, also produced its own rum for sailors to enjoy while at sea. By the early 20th century, Hanschell's Cockspur Rum — named after Barbados' traditional rooster icon — had become the best selling rum on the island.

Today, over a century after Cockspur Rum was first introduced at Hanschell's ship chandlery, it remains a symbol of national pride and joyfulness for the island of Barbados.

After harvesting fresh Caribbean sugar cane, Rhett Harris, master distiller at the West Indies Rum Distillery, crushes the sugar cane in order to extract its pulp, which is turned into molasses. The molasses is then steeped in water sourced from coral-filtered underground springs in Barbados and fermented using a rare culture of yeast that was specifically developed for the production of Cockspur Rum.

Following fermentation, which takes approximately 48 hours, the wash is distilled through one of Cockspur's four stills. In Barbados, distilleries are required to apply for a license to operate a still and are granted a license number upon approval of their application. The West Indies Rum Distillery operates Stills 62, 73, 77 and 79 — Stills 62 and 73 are traditional, copper pot stills and Stills 77 and 79 are four-column stills.

The wash distilled through the column stills produces a rum that is light in flavor and body, while the copper pot stills produce a rum that is more intense and robust. After a portion of the molasses is distilled through the column stills, while the remainder is distilled twice through the pot stills, the two distillates are married together and aged in used, American bourbon casks sourced from Kentucky. The bourbon casks impart flavors of caramel, honey and cinnamon to the rum, and nicely balance out the flavors of the Caribbean molasses and mineral-rich water.

Cockspur 12 Bajan Crafted Rum, which was introduced in 1984 to celebrate Cockspur's centennial anniversary, is a blend of some of the oldest rum aging at West Indies Rum Distillery. After blending casks of rum together based on their flavor profile and maturity (most of which are at least 12 years old), Cockspur's Master Blender lets each blend marry for a few days before bringing the rum to proof using coral-filtered spring water. Cockspur 12 Bajan Crafted Rum has notes of dried tropical fruits, vanilla, toffee and rich oak that earned it a score 93 points at the Ultimate Spirits Challenge in 2011.

Initial notes of slightly sweet, caramelized molasses, toffee, dried fruits, vanilla and nuts. Mid-palate is slightly spicier, with a touch of cinnamon. Finish is medium-bodied with a pleasant, dry warmth.