Caskers Rewards members earn up to 2 store points back when buying this bottle.
Size750mL Proof80 (40% ABV)
A blend of copper pot still rums aged up to 12 years, this luxuriously rich expression is a truly flavor-packed rum. It's offered here with a collectible deluxe metal gift canister.
Notify me when this product is back in stock. 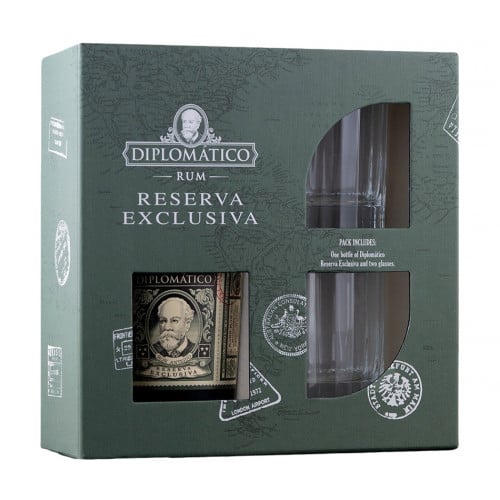 Named Diplomático in honor of the statesman who brought order and balance to a restless era in Venezuela during the 19th century, the 18th-century distiller Don Juancho Nieto Meléndez — also known as El Ambassador — these rums are the exquisite product of Venezuela's warm, tropical climate. The sunny days, cool nights, constant breeze, and abundant rainfall create an idyllic environment for growing and cultivating juicy, fresh sugarcane. The sugarcane is harvested, fermented, and distilled into rum, before being aged in a range of bourbon, port, and sherry casks. They are then masterfully blended by the hands of Tito Cordero, Diplomático’s maestro ronero.

Distilled from sugarcane and aged for up to twelve years, Reserva Exclusiva is a complex blend of a variety of copper-pot distilled rums that have been individually aged and harmonized. Rich amber in color with aromas of dried fruit, caramel, and vanilla, Diplomático Reserva Exclusiva was awarded the Bronze Medal at the 2011 San Francisco World Spirits Competition and the Gold Medal at the International Sugar Cane Spirits Tasting Competition in Ybor City. This version comes with a collectible deluxe metal canister.

Get your bottle with a metal gift canister today!

With a nose of dried fruit, baking spice, oak, and caramel, this rum has baked bananas, honey, chewy toffee, hints of nuts, and citrus zest on the sweet palate with tingly spice notes.