Learn more
Size750mL Proof97 (48.5% ABV) *Please note that the ABV of this bottle may vary
An award-winning handmade whiskey that has been aged for 3 years, two of which were spent in stout Oregon Oak barrels.
Notify me when this product is back in stock. 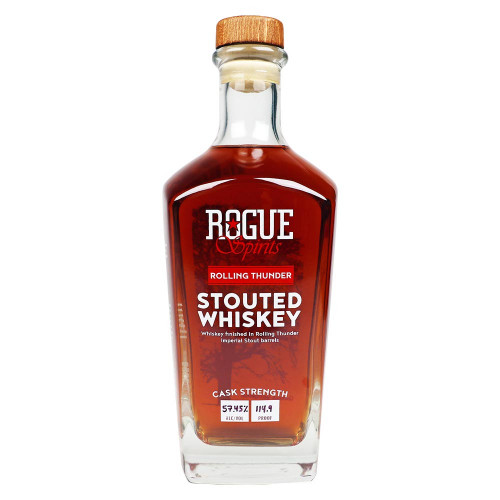 All Rogue's spirits are made from ingredients off their own Rogue farms and Rolling Thunder Stouted Whiskey is no exception. It's a handcrafted limited single malt whiskey distilled in small batches. It is aged for three years, spending the first in new Oregon Oak barrels and the remaining 2 in stout Oregon Oak barrels that used to hold their own Rolling Thunder Russian imperial stout. Combining the spice and citrus with deep and dark tones from the stout, it's single malt and bourbon, walking hand in hand.

Combines the spice and citrus from the Oregon Oak with deep and dark tones from the stout. Plenty of dark cocoa, toffee and coffee, and a grain finish.