Size750mL Proof123.4 (61.7% ABV)
Clocking in at over 120 proof, this Roaming Man cask strength straight rye is the embodiment of the spirit of exploration and tradition.
Notify me when this product is back in stock. 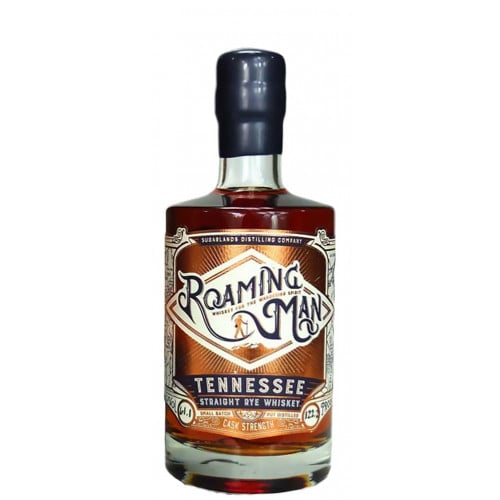 This Cask Strength Straight Rye is crafted from a mash bill of 51% rye, 45% corn, 4% malted barley. Aged for two years and bottled at 123.4 proof, Roaming Man seeks to capture the essence of the spirit of exploration and tradition. In honor of the traditional heritage of whiskey distilling, this intriguing single malt has notes of rye spice, dried fruits, and sweet vanilla.

In the mid-1800s, a handful of European settlers from Ireland and Scotland made their home in the Great Smoky Mountains of Tennessee. Due to the abundance of sugar maple trees in the area, the settlers affectionately renamed it the “Sugarlands.” To this day, the area’s rich land, abundance of corn and, of course, predominance of sugar maple trees have made the Sugarlands a moonshiner’s paradise.

Opened in downtown Gatlinburg, Tennessee in 2014, Sugarlands Distilling Company produces craft-quality moonshine, whiskey, and liqueurs “with one foot firmly planted in the past and the other in modern times.” Using an artisanal stone mill to grind grains like corn and rye into meal, Sugarlands Distilling Company then mixes in pure Smoky Mountain water to create the mash. From there, the liquid is transferred to the fermenter to simmer for a few days, and when the time is right, that "wash" is pumped into the copper pot still where it is heated and distilled. The alcohol vapor filters through the copper pipes and rises up through the plates of the distillation column, down through the chilling column to cool and is finally poured out of the Spirit Safe.
Explore all Sugarlands bottles >>

Dried fruit on the nose with notes of rye spice. Sweet dried fruits, vanilla, subtle oak, just a touch of apple, and spice all the way through to the finish. The finish is smooth, lingering and balanced.