This product is available in: CT, DC, NJ Unfortunately, we can't ship to PO Boxes and APO addresses.

Size750mL Proof114.4 (57.2% ABV)
Once a prominent name, the Hughes Distillery closed its doors before Prohibition. The brand was recently revived by the great-great-grandson of its founder. This rye was crafted with a mash bill of 95% rye and 5% malted barley, then aged in charred (barrel char no. 4) American white oak casks for 8 years.

This product is available in: CT, DC, NJ Unfortunately, we can't ship to PO Boxes and APO addresses. 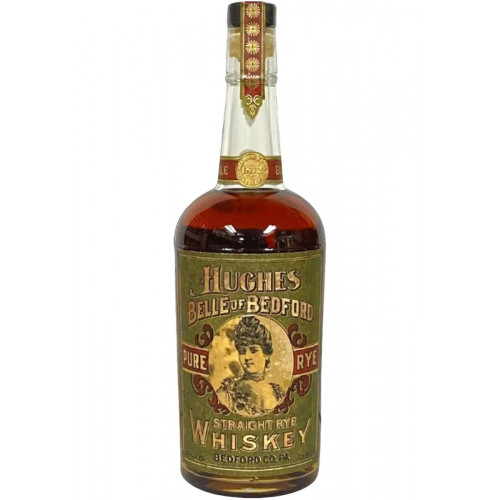 Founded in 1872 by John J. Hughes, the Hughes Distillery stood on sprawling farmland in Pennsylvania. At first, the distilling was a side business for the farm, but as the whiskey's reputation grew, so did the operation. Eventually, Hughes' descendants rebuilt the distillery, changing the name to Hughes Bros. The distillery closed its doors once Prohibition started. Today, the Huges name lives again, thanks to its founder's great-great-grandson. Cyrus Kehyari not only revived the brand, but kept the whiskey as true to the family recipe as possible.

Hughes Belle of Bedford is a single-barrel expression that is crafted with a mash bill of 95% rye and 5% malted barley. Aged in charred (barrel char no. 4) American white oak casks for 8 years, each barrel is carefully selected and brought to proof with the Hughes family estate artesian spring water. It's then bottled by hand at 104 proof without chill filtration.

Get your bottle of this rye today!

You can expect a rich nose with aromas of spice, vanilla, and caramel. The palate has plenty of rye spice, butterscotch, demerara sugar, and hints of espresso, culminating in a long and spicy finish with a touch of charred oak.