Learn more
Size750mL Proof92 (46% ABV) *Please note that the ABV of this bottle may vary
A fitting tribute to America's first female, black, and Asian VP, this whiskey is a blend of 7-year-old bourbon and 5-year-old rye. The portrait adorning the bottle was painted by local artist Lex Marie.
Notify me when this product is back in stock.

This product is available in: DC, NE, NH, ND Unfortunately, we can't ship to PO Boxes and APO addresses. 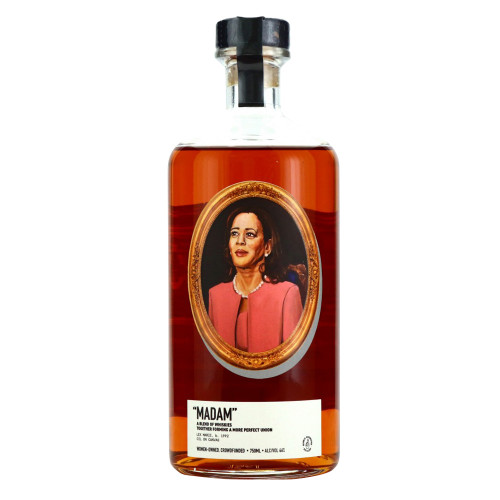 They had a bourbon, apple brandy, vodka, and rye whiskey, before crafting Madam. It's the most fitting of tributes ― a blended whiskey that is inspired by the Vice President. Not just any Vice President, but America's first female, black, and Asian Vice President. Presented in a bottle adorned with the portrait of Kamala Harris that was painted by local artist Lex Marie, this whiskey is a blend of 7-year-old bourbon and 5-year-old rye with a mash bill of 58% rye, 37% corn, and 5% malted barley. It's bottled at 92 proof.

Grab your bottle of this whiskey today!

The nose opens with caramel, orchard fruit, citrus, and a touch of spice. On the palate, you'll find butterscotch, candied fruit, and spice. It finishes smooth and creamy with citrus zest, black pepper, and a gentle warmth.