Size750mL Proof94 (47% ABV)
This unique whiskey was a “happy mishap” an accidental combination of rye and bourbon barrels during production. The result? An incredibly pleasant blend.
Notify me when this product is back in stock. 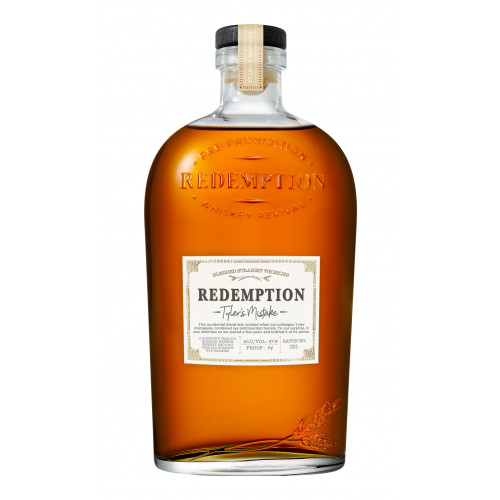 Redemption is owned by Deutsch Family Wine & Spirits, they produce several whiskeys at the MGP Distillery in Indiana. This new release is said to be a “mistake,” according to creators, this new Redemption Tyler’s Mistake whiskey arose from an accidental combination of rye and bourbon barrels during production. The result was a pleasant blend and so this “happy accident” was left alone for a few years before being bottled at its prime. Bottled at 94 proof, this limited edition offering is a blend of 2 & 3 year old rye and 9 year old bourbons.

Black pepper and spice on the nose with vanilla, oak and sweet caramel. The palate is pleasing with spiced rye oak and cherry. The finish is long and subtle with further notes of oak, cinnamon and cherry.