Size750mL Proof122.4 (61.2% ABV)
Aged for a minimum of seven years, this straight rye whiskey is bottled at barrel proof.
Notify me when this product is back in stock. 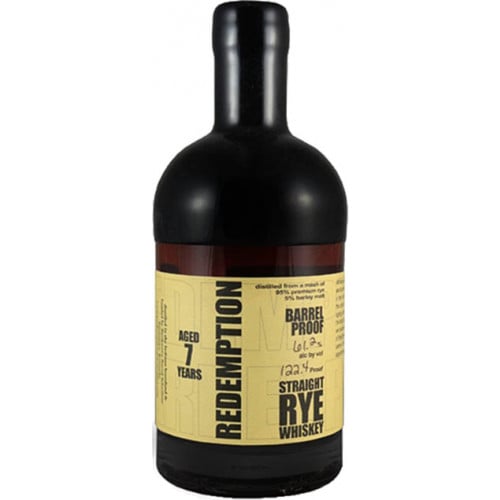 Nearly a century after Prohibition, the preferred whiskey of the saloon era is experiencing a resurgence. By law, rye whiskey must be made from a mash of at least 51% rye. Rye that has been aged in charred, new oak barrels for at least two years earns the title straight rye whiskey. Redemption Straight Rye Whiskey is made from a mash of 95% rye and 5% malted barley, and is matured for a minimum of seven years. Following maturation, the whiskey is bottled at barrel proof (122.4 proof).

As a result of this extra-long maturation process, Redemption 7 Year Old Barrel Proof Straight Rye Whiskey has notes of toasted bread, woody spices and honeyed nuts after being opened up with water. In addition, the finish is bold and warming, with notes of spices balanced against a subtle touch of fresh vanilla, cream and citrus.

Redemption 7 Year Old Barrel Proof Straight Rye Whiskey represents a unique expression of whiskey that dates back to the American Revolution. Pick up a bottle today!

With the addition of water, the whiskey has notes of toasted bread, woody spices and honeyed nuts. Finish is bold and warming, with notes of spices balanced against a subtle touch of fresh vanilla, cream and citrus.