Size750mL Proof130.82 (65.41% ABV)
The universally acclaimed Seagrass whiskey gets the Gray Label treatment with this beautiful expression. 2 distinct 16YO Canadian ryes were finished in a combination of apricot brandy, Martinique rhum, and Malmsey Madeira casks, resulting in a strikingly mature and rich 130.82-proof spirit. 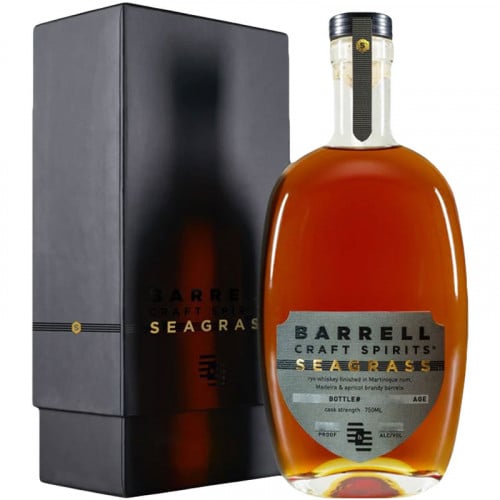 “I started this company to share my passion for unique, high-quality spirits,” says Joe Beatrice, founder of the independent bottler Barrell Craft Spirits, whose self-proclaimed goal is to find and curate the best barrels and batches of whiskey and rum, wherever they may be. To preserve the singular characteristics of each batch, Barrell bottles all their whiskeys at cask strength. “The complexity and concentration of flavor is greatest when the whiskey comes right from the barrel,” says Beatrice.

With each batch being a limited release, their goal is to "explore different distillation methods, barrels, and aging environments". Their releases have garnered several of the most prestigious awards and won the hearts of bourbon lovers across the globe with whiskey authority Fred Minnick naming it Best American Whiskey of 2018.

Released in 2021, Barrell Seagrass is a blended whiskey that combines American and Canadian rye whiskeys that were finished in a wild combination of casks. The experiment proved to be a massive success that received universal acclaim, netting several of the most prestigious medals and awards. In 2022, Seagrass Gray Label was released. Only the best of the best BCS expressions ― the rarest ones that have had the most work poured into them ― get the Grey Label treatment. This one started with two distinct 16-year-old Canadian rye whiskeys that were finished in apricot brandy casks, Martinique rhum casks, and Malmsey Madeira casks. Finally, they were married into a mature, complex, and rich 130.82-proof expression

The nose of this golden straw whiskey leads with savory aromas, exotic spice, rye toast, cornbread, grassy, and oak notes. The palate is oily with nuts, tea tree, cocoa butter, citrus, grapefruit zest, and earthy notes. The finish is juicy and fruity with passionfruit, banana, and a lingering rye minerality.